Zelda: Breath of the Wild seems to perform better in portable mode than docked

Well, this isn’t good. Digital Foundry’s latest test includes the biggest launch title for the Nintendo Switch, which is Zelda: Breath of the Wild. If you don’t know, Digital Foundry does performance tests to see how, exactly, games are performing and which resolutions they’re running at.

For Zelda, they found something really interest: the game runs better in portable mode than it does when the Switch is docked for use on a TV. 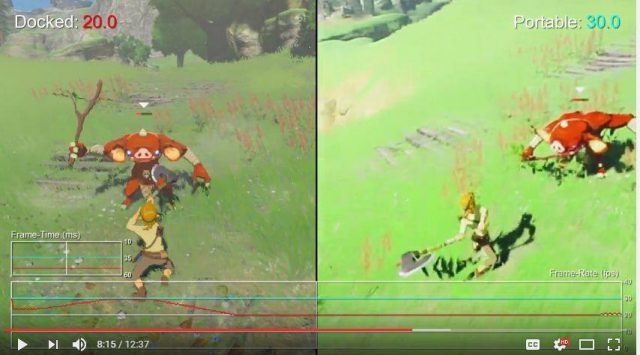 In some areas in docked mode, the game can drop to as low as 20 frames per second, while the same area in portable mode locks in at a smooth 30 frames per second. Mind you, this is after the day one patch, which is said to have addressed framerate issues.

Even more unsettling is that there’s seemingly no rhyme or reason to the dips, with Digital Foundry reporting that framerates appeared fine during a battle in one area, and upon returning to the cleared area later on the game dipped with seemingly little going on. You would think the ensuing battle was the cause, but it performed better throughout.

This is especially shocking because it was believed that the Switch would have better performance while docked as it can draw more power than when it’s portable. Instead, it seems that the higher 900p resolution of docked mode may be causing problems compared to the 720p the game runs at when portable, though that’s just speculation and we won’t know the true cause until Nintendo comes out and addresses it.

Until then, dare we say: it might be better to play Zelda in portable mode right now if you can’t stand to dip below 30 frames per second. The game does still run fine in several other areas, but it’s an option to consider if you were yearning for a locked 30FPS.

local_offer    Legend of Zelda: Breath of the Wild  Switch