The Virtual Console service that launched this week for Wii U is certainly evolved and refined from its Wii ancestor, if not radically changed.

Eight titles are available at launch in North America:

The list reads more or less the same for Europe and Australia, less Balloon Fight and Kirby but with the addition of Mario’s Super Picross.

A spot pass notification from Nintendo hints at future titles including the already-confirmed Pac-Man and Super Metroid as well as games from the Mega Man series (surprise), the Super Mario Bros series (double surprise), and the Street Fighter series (meaning a Street Fighter II game for SNES. Damn them forever they don’t skip that World Warrior trash and go straight to Turbo), also vaguely confirming Gameboy Advance and Nintendo 64 games for future release.

It’s certainly a light launch, especially in light of Japan’s epic lineup which includes seven Super Nintendo titles, but there’s enough there to whet your appetite at least.

Games are displayed in 1080p (although with black borders to force a 4:3 ratio of course) and they look great in all their pixelated glory. Of particular note is that every game I’ve downloaded so far appears to be running at 60 Hz, which is amazingly good news for everybody in PAL territories who’ve had to put up with the borders and slower speed of the 50 Hz versions for so long, especially after the recent scare of 50 Hz Kirby and Balloon Fight on Wii U. Super Mario World in particular benefits from the bump in smoothness. Let’s hope future releases keep up the trend.

In terms of the emulation options, all the features you’d expect to see are there and not much else.Â Exiting the game with the home button will automatically suspend your progress so you can jump straight back in next time. If you need a little extra assurance for those hardcore old NES games that donâ€™t allow saving, you can create a restore point at any time. You can easily load that save point back up if you lose too many lives or decide you can do better. Usual bits and bobs like the digital manual are also present.

Something the whole package seems to be lacking is an integrated link to each game’s Miiverse community. If you’re playing Donkey Kong Jr and something fun occurs to you, you actually have to back out to the home menu, wait for the Miiverse app to load and post your quip / doodle / screenshot there before returning to your game. How hard would it have been to put a ‘post to Miiverse’ link in the Virtual Console menu? ItÂ definitelyÂ seems like a missed opportunity to capitalise on one of the main appeals Wii U Virtual Console has over the Wii version.

Despite that misstep the Miiverse communities are obviously a very welcome feature. The ability to quickly and easily leaf through what other people are saying about your favourite old Super Nintendo game, or to trade codes, secrets and hidden easter eggs through screenshots, legitimately adds a social layer to these experiences and will doubtless become an exciting element of each new VC release. In short, the Wii U Virtual Console supports any control configuration you could reasonably want to use. Each controller is fully mappable, which is very welcome if you want to play an NES game with the gamepad, classic controller or pro controller. I don’t know about you but I always feel as though Y should be 1 and B should be 2, as opposed to B being 1 and A being 2, so playing with the uneditable Wii VC controls was pretty painful. Now you can easily go in and set it up exactly as you’d like. You can even set a button to bring up the VC menu in case the gamepad is out of reach.

Speaking of the gamepad, the games look great on the smaller screen, if a little less defined. At first play I thought I detected a bit of input lag when playing purely on the gamepad, but after someÂ experimentationÂ I think it’s a result of the slightly spongier buttons the controller has compared to the Wii remote or pro controller.

All in all if somebody’s using the TV and you want to play F-Zero you should try putting the gamepad somewhereÂ close-byÂ on its stand and using it as a tiny TV while you play with the pro controller. The gamepad buttons areÂ serviceableÂ enough if it’s all you have or you want to play in bed though.

Ordinarily it’s a bit presumptuous to take cost into account when reviewing a product, since it’s really the individual gamer’s call as to what constitutes value. In this case it’s worth a look though, since it isn’t immediately clear what exactly you’re paying for. Nintendo already has all the game ROMs sitting around in their servers, so that costs virtually nothing. They need to develop an emulator for each console that will run on Wii U, which is a once-off cost. They need to curate some promo images, a manual and a Miiverse community for each game, which supposedly takes a little manpower. So what are they asking each gamer to pay for theÂ privilegeÂ of access to these games? 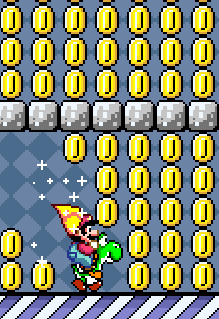 Well to take an example, across all the territories Super Mario World on Wii U’s Virtual Console will cost you around 10 per cent of what it costs to get a brand new ultra-AAA game (think Grand Theft Auto V). World is priced atÂ $7.99 in the US,Â $10.40 in Australia andÂ â‚¬7.99 / Â£5.49 in Europe. Admittedly this seems pretty high. You’ll get an 80 per cent discount if you already own the game for Wii â€” in which case I’d say the addition of Miiverse and off-TV play is worth it if you plan on going back to the game at some point in the future â€” but you might need to weigh up exactly how much each game means to you if you have to pay the full price, since it’s easy to imagine the cost will stack up quickly.

If I was to make one point inÂ defenseÂ of Nintendo’s pricing decision (apart from the fact that they’re free to ask whatever they want for access to games they own), I’d say the company is protecting the integrity andÂ perceivedÂ worth of a library they’re very proud of and respectful toward. These games may be small and simple compared to the blockbusters coming out today, and they may bring no fresh experiences to the table, but the last thing Nintendo wants to see is theirÂ cherishedÂ back-catalogue regarded with the popcorn-like mindset we might bring to a 99 cent iOS game. In the end they’re not charging you what it cost them to produce the game plus a profit, they’re charging you what they feel the experience should cost you.

So if you disagree with the pricing very strongly I urge you to vote with your wallet and not buy any of the Virtual Console games. I wouldn’t hold your breath for a price drop though. At this point I strongly suspect Nintendo would prefer to sell 10,000 copies at $8 than 40,000 at $2.

If you’re happy to fork out the asking price for each title, the Wii U Virtual Console isÂ definitelyÂ the most convenient, pretty and feature-rich way to legitimately enjoy these old games.

On that note, to the first person who jumps into the comments and writes something to the effect of “oh great Nintendo releases the same bunch of gaems they’ve released 20 time already I can’t wait to play them never haw haw haw”: congratulations on being the awesomest, funniest and most original person among us. Thank youÂ sincerelyÂ for expressing your sage-like wisdom and unveiling truths previously unseeable to us mere mortals.

In seriousness, that person would be missing the point. Nobody’s expecting anything new or revolutionary from this service. It’s a way to play old games you can’t get enough of, want to return to, or missed the last few times around. It enhances without subtracting by instituting save states, off-TV play and a dedicated forum in which to discuss and boast about yourÂ favouriteÂ games with like-minded players. It delivers exactly what it means to deliver, and as time goes on the Virtual Console will absolutely become a bullet-point feature of the Wii U, whether or not you agree with me that that’s something we should be pleased about.