With sales of 3DS software much improved this year over last, and with particular growth in the area of digital downloads, Nintendo may be looking to take some of the lessons learnt from their successful handheld and apply them to Wii U.

Like Wii U, 3DS was heavilyÂ criticized over a slow rate of game releases in the months after launch. It’s an issue that Nintendo of America’s ReggieÂ Fils-Aime is all too familiar with. 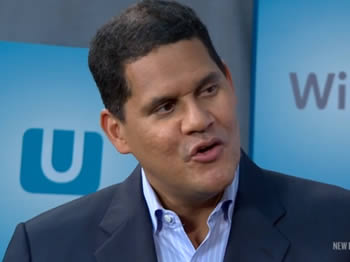 In the same interview Reggie shed some light on the success 3DS has seen with its eShop, the digital download service that directly lay the foundation for a subsequent service on Wii U.

“We have 15 Nintendo-published titles available, both physically and digitally (on 3DS),” Reggie said.

“So far in 2013, of those 15 available in this format, 11 percent of sales have come through full digital downloads of those games.”

It’s an impressive number made more impressive when you consider several of those games – including Ocarina of Time, were released digitally after they were already available in stores for some time and most Nintendo fans already owned them.

Remember it wasn’t until after some stellar post-launch games for 3DS in late 2011 and early 2012 includingÂ Super Mario 3D Land, Mario Kart 7 and Resident Evil Revelations, that sales of the system turned right around to make it dominant in its market. The constant promotion and incentive of the eShop has kept interest high too, as evidenced by the growing sales figures.

No doubtÂ NintendoÂ has a mind to reproduce both these measures for its home console. And since today’s amazing 3DS-centric Nintendo Direct broadcast has cleared away as few of the expected handheld E3 announcements, it’s looking like this June could see a big push to turn Wii U’s fortunes around.

How do you feel about getting Wii U titles digitally?