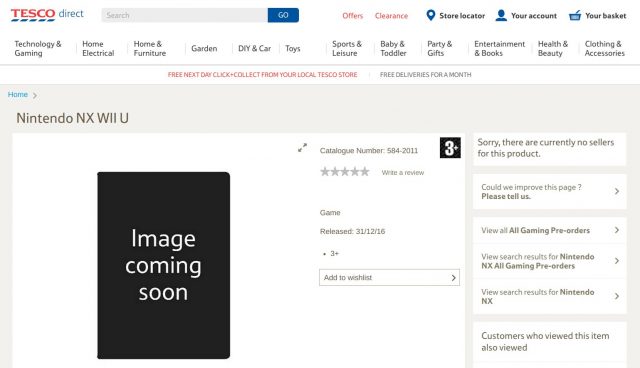 One of the biggest retailers in the UK, Tesco, has listed the Nintendo NX on its site and given it a price tag: Â£350 pound sterling. That’s $450 USD.

The listing has since been taken down, perhaps after a strongly-worded email from Nintendo UK.

Nintendo was rumored to have hosted a meeting for its European retailers last week at the Nintendo HQ in Germany regarding the NX. Could they have revealed the price of the NX then?

If one was a conspiracy theorist, one could draw a conclusion that Tesco and other retailers were given a price by Nintendo, which Tesco accidentally leaked on its site.

But if that was the case, and the NX actually retailed at $450, then one could also assume that the NX would fail miserably in the marketplace.