The state of Wii U: sales, strategy and the organizational re-shuffle

It’s no secret the Wii U is under-performing.

Nintendo recently released their sales numbers for this past financial year. The good news: they’re back to making a profit after last year being forced to announce they had lost money for the first time in their entire history. The bad news: they actually made a small operating loss, which basically means they spent more than they earned and the only reason they made a profit was because of smart investment and currency fluctuations.

While the 3DS has performed well, movingÂ 13.95 million units in the past year, the Wii U seems be at an unforeseen sales standstill. After sellingÂ 3.06 million units worldwide before the end of 2012, Nintendo forecast the Wii U would sell 4 million by the end of the financial year. However, that time has come and the number currently sits atÂ 3.45 million. 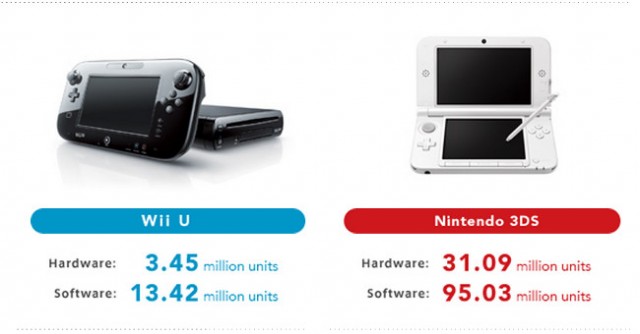 As many trolls and over-emotional armchair analysts have been quick to point out, the fact that Nintendo has seen sales of only .39 million units in the months January to March indicates that the Wii U is an abhorrent failure and a useless piece of plastic junk. However, while it’s clear that the numbers indicate a troubling lack of momentum, I think it’s probably a tad early to call for a time of death just yet (the console has been out less than half a year). With that in mind and taking into account the recent end-of-year report from Nintendo, I propose having a look at the Wii U’s prospects going forward using facts and figures and a little bit of informedÂ speculation rather than hate and dismissal and guff.

Nintendo has soldÂ 13.42 million games for Wii U thus far. It’s unclear if this includes digital purchases (it usually doesn’t). With the console’s sales at 3.45 million this means an average attach rate of around four games per console. Given there are only two games in stores that have the word ‘Mario’ anywhere on the box, I’m going to assume that a lot of Wii U owners only have two games, and the rest (constituting most of the peopleÂ readingÂ this article I’m sure) have many more than four.

Software moves hardware, and so the issue with moving Wii U hardware can reasonably be put down to a problem with software (and message, but we’ll get to that later). A number of skittish third party developers moving away from Wii U certainly hasn’t helped, but Nintendo is certainly going to rely on it’s stable of first party franchises to get the box into people’s homes. In fact theÂ companyÂ has flat-out said that, like with the 3DS, it intends to follow up this unexpected lull with a higher pace of releases. We already know of a few games coming for Wii U this year, but people seem to forget Nintendo’sÂ tendencyÂ to keep some projects completely secret until fairly close to launch. Just look at the last few Nintendo Direct broadcasts.

So the question is, how effective will future releases be atÂ revitalizingÂ Wii U hardware sales?

The recent earnings release was accompanied by updated sales numbers for all platforms, including the original Wii. It’s interesting to see just how many of Wii’s highest-performing first-party games were released well after the console launched, helping the system maintain its unprecedented upward sales trajectory. 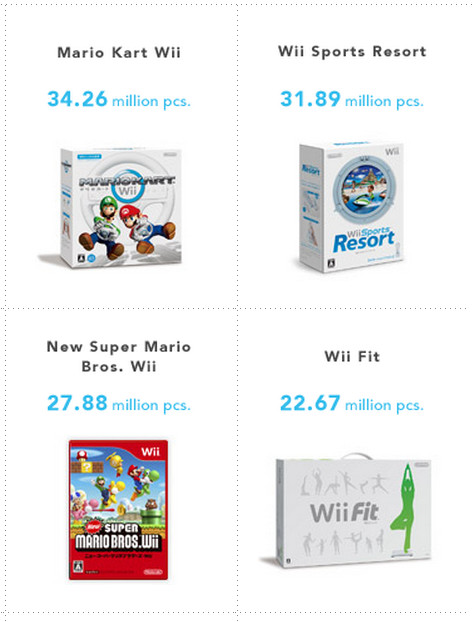 Next to the pack-in Wii Sports, the second-highest selling Wii game is actually Mario Kart Wii atÂ 34.26 million units. The game wasn’t released until a year and a half after the console’s launch. Nintendo plans to unveil a Wii U version of Mario Kart at E3 in June.Â Also in the top ten are Wii Fit and Super Smash Bros. Brawl, also games that weren’t released until a year and a half after launch, and also games Nintendo currently has in the works for Wii U.

Wii and Wii U are different situations of course. Wii didn’t have an older, similar console on the shelf next to it confusing customers and cannabalising sales. Wii soldÂ phenomenally out of the gate because of how obvious its hook was. The appeal of Wii U is a little more subtle but will hit with the general populace as Nintendo gets its message down and the original Wii fades away. In the meantime, judging Wii U on its first six months of software is like judging Wii onÂ Wii Play and Elebits. Games with mainstream appeal simply aren’t there yet, but they will be.

Nintendo have given every indication that they’ve been forcedÂ somewhatÂ out of their element this hardware generation, but they’ve also shown a coherent strategy going forward.Â They stressed early this year their need to co-operate with development partners to meet the growing demands of game development for their first HD system. They announced also that their handheld and console divisions would be merged to allow moreÂ efficiency.

Keep in mind that these changes have been happening concurrently to the first half-year’s worth of Wii U support and development. Given the company’s focus on positioning thus far, it isn’t unreasonable to imagine Nintendo plans to get all its ducks in a line before making a big push later this year with a relaunch of sorts for the Wii U.

It’s worth remembering that the daily news and announcements thatÂ maintain a constant tug-of-war between Wii U fans and detractors in the video games community – whether eight games is good enough for a virtual console launch,Â Â how long is an acceptable transition time between menus – are completely invisible to the non-engaged consumer that Nintendo will be seeking to target throughout theÂ remainderÂ of this year.

The three new television spots Nintendo recently revealed (distasteful though their content may be to us) mark the beginning of a campaign to drive awareness of the system to a general audience that has barely any idea the Wii U exists, let alone that we still have to wait a few months for Super Metroid. A brand relaunch in other words, supported by a newly streamlined global strategy, is exactly what the system needs to give full impact to the announcement of key first-party software titles at E3 and beyond.

[Authors note: after I wrote this article it came to light that Nintendo will not hold a traditional large-scale press conference at E3. This is entirely in line with everything I’ve said thus far. Given how different the company’s messaging needs to be to different groups – game announcements and minor service improvements to fans, education about the system and its features to non-fans, financial information and sales strategies to investors – trying to address it all in a single hour-long talk makes no sense. Think about past E3Â conferences. Nintendo announces Wii music or Wii Sports Resort: fans groan. Nintendo give further details on a new console we already know about with a focus on how new games will use the controller: the general population is confused about whether it’s a new system or a peripheral for the old one. Game announcements and great news will still come out of E3, albeit probably in Nintendo Direct format, but Nintendo will be able to reach that broad audience on its own terms without trying to do it on stage.]

Â The State of Wii U

It’s been less than five months and many of us are very happy with the Wii U. Others are less than pleased, and some (as always) are insisting that Nintendo’s latest is dead in the water. But it’s ridiculous to deny that the Wii U has the potential to capture an audience. System innovations like off-TV play, Nintendo TVii and Miiverse have been continually developed and refined over the first few months of this year as Nintendo undergoes a restructure and the system itself doesn’t quite manage to sell even half a million units.

Nintendo’s goal this coming financial year is to sell 9 million Wii U units, and it’s difficult to imagine they plan to do it by moving at the pace they have been so far this year. Â There’s a reason the company has been streamlining its management. The time is right and all indicators point to a renewed mass-media campaign to get the non-engaged masses educated about the Wii U. They’ll never know about the big day 1 patch, the months-long lack of Virtual Console, the long loading times. All that stuff that has so many haters offside is well and truly in the past. If Nintendo can reach out to people and at least get them interested in the idea of Wii U and what it brings to gaming, the rest of the year worth of huge first-party announcements and releases make a reversal of fortunes seem very possible.

What has you most excited for the coming year of Wii U? Do you think Nintendo will make their sales forecast?