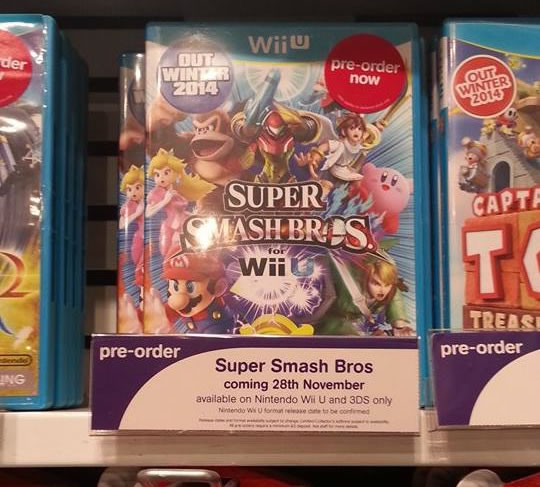 Retailers tend to reveal, or predict, or anticipate release date for games all the time. Some times they’re right, other times not so much. This time, UK retailer HMV recently listed the Super Smash Bros U release date for November 28th, 2014.

A photo of the pre-order (seen above) box at an HMV store in London shows an added release date, listed as November 28. Nintendo as yet to formally reveal the Super Smash Bros U release date, but we know that it’s coming this year on the Wii U and 3DS, and we wouldn’t be surprised if it’s released during the massive games bonanza that happens every Fall, where most of the high-profile games are released.

As usual, this could simply be a placeholder release date, as it’s a lot easier to sell a pre-order of a game if it has a release date attached to it.

Super Smash Bros U is Nintendo’s big title for the Wii U this Fall. Earlier this Spring and Summer, Mario Kart 8 was able to boost Wii U sales considerably, and hopefully Super Smash Bros U will have the same effect this upcoming Fall and Winter.