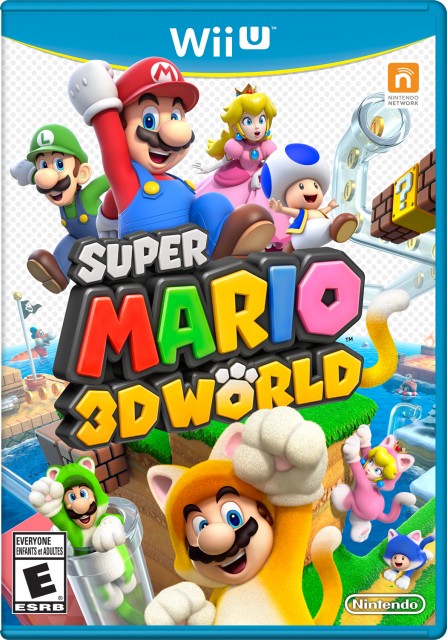 [Editor’s Note: This is a dual review from two Wii U Daily contributors, Matt Ferri and John Zaccari. Matt supplied the written portion of the review, while John supplied the video review. Watch and read them both to find out what we thought collectively of the game!]

Whenever I play a new 3D Mario title, I am surprised at how the plumber in red continues to appeal after so many years. From Super Mario 64 to Galaxy, Iâ€™ve found that itâ€™s Nintendoâ€™s unique ability to combine the old with the new that keeps The Mushroom Kingdom aloft through each generation. Super Mario 3D World is no exception; and while I was skeptical at first, Iâ€™ve come to realise that Marioâ€™s latest outing narrows the realm in which familiarity and ingenuity come together in perfect accord.

Before playing Super Mario 3D World, I all but shrugged at the concept of running around in the guise of a feline. Letâ€™s be honest: a new power up isnâ€™t quite as enthralling as, say, a shift in gravity. But once the disc was in, it took me all of three hours to stop chasing my own tail;Â meanwhile, my eyes were fixed in a perpetual state of wonder.

Itâ€™s impossible not to appreciate the gameâ€™s superb level design. Each stage presents a new dynamic, and not one dynamic overstays its welcome. I was constantly reminded of games like Donkey Kong Country and Yoshiâ€™s Island, in which every stage inspired a brand new challenge.

Levels were packed full of things to do. Within every stage are three hidden stars and a stamp to collect, which encouraged me to explore every nook and cranny on an otherwise linear path. While the levels were never so big that I could get lost, I still had, and wanted, to go out of my way to locate those harder-to-reach collectibles; and this was all before making the leap at levelâ€™s end to earn a golden flag pole.

From cat onesie to raccoon tail, every element was introduced seamlessly, and all without need for any hand-holding. I learned as I went, and I was inspired to experiment with whatever tools the game threw at me.

With such excellent gameplay, I felt undeserving of the wonderful visuals that came with it. 3D Mario looks brilliant in HD. In fact, Nintendo utilised their new hardware to improve their level design. Clever use of light and shadow turned a simple aesthetic into the theme of an entire stage; and beautiful rain effects added personality to a haunted shipwreck, complementing the foreboding soundtrack.

The soundtrack, mind you, is as wonderful as the game itself. Each track adds just the right level of energy and tension to suit the theme of the stage.

Great gameplay, art and music alone might have been enough to meet my expectations, but Nintendo added several new features as well, every one of which blends perfectly with whatâ€™s tried and true.

â€œThe Adventures of Captain Toadâ€ was one of the more notable additions. Each of these stages is situated on a small island in which Captain Toad, who, unlike Mario, cannot jump, must collect five green stars while avoiding various obstacles. These puzzle-based stages were optional, but they were so delightful that I wouldâ€™ve been insane to pass them up. 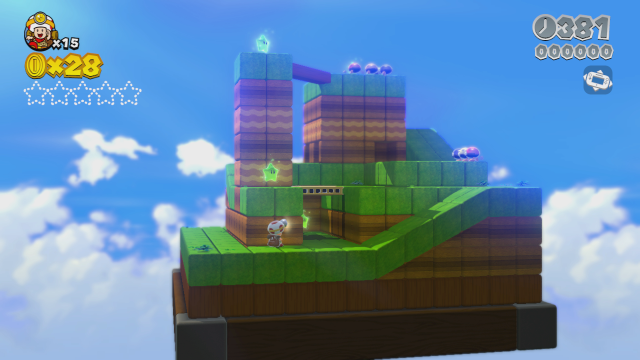 The option to play with peers is another welcome feature. I completed the main quest on my own before playing again with a friend. I found that playing together added a lot of laughs, but also a dose of frustration. Suffice it to say that you need patience, both with each other and with the game’s camera. I canâ€™t say which out of single-player or multiplayer I preferred; solo platforming is what Iâ€™m used to, but the option for multiplayer adds variety and a great deal of replayability to the game.

Even when playing alone, I was still interacting with others thanks to Miiverse and the ghost Mii features. Posting to Miiverse at the end of a course was encouraged by the stamp collectibles, which enabled me to attach pictures to my posts. Whenever I wasnâ€™t inspired to write my own post, I read othersâ€™ comments instead, most of which paid respect to a stage that was particularly challenging or unique.

Replaying a level with ghost Miis alongside also invigorated a sense of social connectivity. On occasion, I played a level again in order to find a star that Iâ€™d missed, but the Miis of other players made a familiar stage feel new again by adding a competitive edge, which urged me to race to the finish line ahead of them. 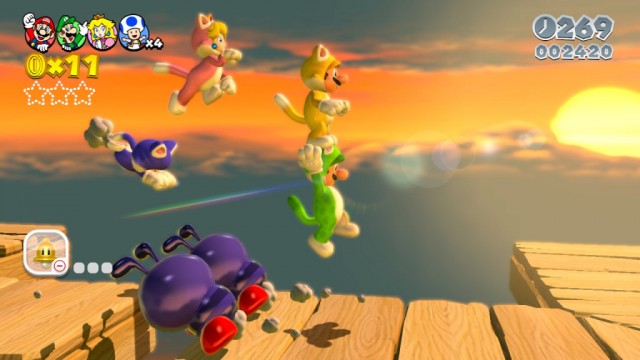 Super Mario 3D World is close to gaming perfection, but there is so much Nintendo did right that it makes the one flaw stand out like a bull in a China shop. Iâ€™m talking about the bosses. In my opinion, they were easy, repetitive and boring. By World Four, the enemy blockade stages, which I had to complete to progress any farther, had grown stale, and I found myself frustrated rather than excited when they emerged. Besides the final showdown, even the battles with Bowser induced yawns. It is a small complaint, but I found the bosses in Super Mario Galaxy 1 and 2 far more fun and interesting.

Complaint aside, Iâ€™m 24 years old, and Iâ€™ve never enjoyed a Mario game more in my life. Eighteen years ago I would have loved this game, and in eighteen years Iâ€™ll still love it. Super Mario 3D World is the game for everyone. Bar those pesky bosses, every element, both familiar and new, has been woven into an intricate tapestry that seems effortless in its construction. From gameplay to music, everything has been formed with such precision that if one seam were to be removed, the whole game would fall apart. Mario is 32 years old, and heâ€™s never performed better.