Skyrim developer still unsure about the Wii U

Developer and publisher Bethesda, best known for the recent hit Skyrim, are still unsure about the Wii U. Bethesda Vice President of PR and marketing, Pete Hines, said that they like to put their games out on “as many platforms that will support them”. However, when it comes to the Wii U, that apparently still isn’t a platform that will support their games. Speaking in the latest issue of UK tech magazine MCV, Hines said of the Wii U, “So far the Wii hasnâ€™t fitted into that [strategy]. 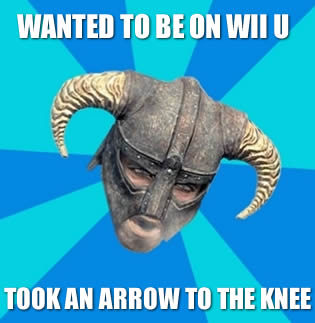 Whether Wii U does down the road is TBD”. This is an odd statement, considering that the Wii U, technology wise, offers the same features as the Xbox 360 and PlayStation 3, and is a much more powerful console with twice the memory. Not to mention the possibilities the GamePad controller could bring to an RPG such as Skyrim.

Almost a year ago, the very same Pete Hines said that Skyrim on the Wii U was “definitely a possibility”. And even earlier that year, back in June 2011, Hines claimed that Bethesda would support the Wii U if it was powerful enough. It’s been proven that the Wii U is more than “powerful enough” when compared to current generation hardware. It looks like Bethesda has few intentions of supporting the Wii U, if any at all. Which is a shame — they make some great games.