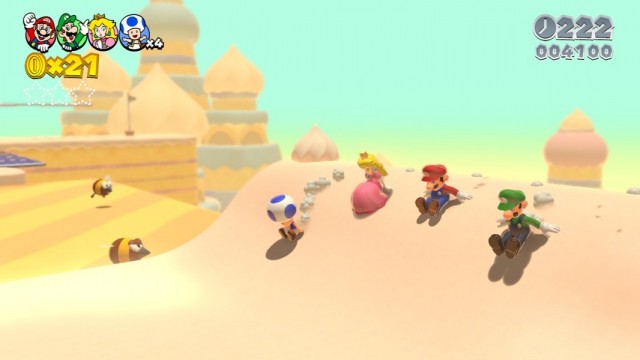 Since the release of Super Mario Galaxy in 2007, Nintendo has greatly propelled the development of Mario platformers, both 2D and 3D.

Super Mario 3D World will mark the third Mario platformer for Wii U in just over a year, counting New Super Luigi U. While consistent development is certainly appreciated, gamers are beginning to feel that Mario himself Â shouldn’t be garnering quite so much attention.

Nintendo of America Sr. Director of Corporate Communications Charlie Scibetta responded to these notions in a recent interviewÂ with Shacknews.

Nintendo wouldn’t be the same without Mario, but gamers continue to demand new IPs replete with new characters and themes. On this note, Scibetta added:

You could call all the games that we’re making here new IP in the sense that they’re new gameplay experiences. They just happen to also have the IP that people associate with.

In other words, Nintendo chooses to apply many of its platforming dynamics to their platforming IP, Mario. If they developed a new IP within the same genre, then we would all be asking, “Why didn’t they just use Mario?”

Scibetta acknowledges that for a new IP to be justified it needs to be within the realm of a new genre with gameplay themes and mechanics unseen in existing IPs. For platforming, we have Mario and Donkey Kong; for adventure and puzzle, there’s Zelda; and for strategy,we have Pikmin and Fire Emblem.

There are many more, besides; but until Nintendo’s developers are inspired to develop software with gameplay mechanics unaligned with their current range of characters, the only point in creating a new IP would be to say that they created a new IP. In short, Â it wouldn’t be the greatest selling point, and it certainly wouldn’t be very ‘Nintendo’.