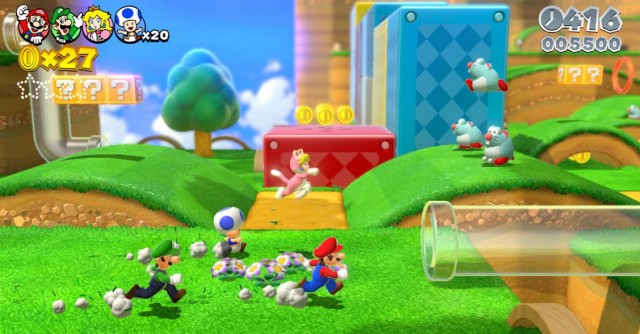 Mr. Miyamoto has been busy with interviews from popular YouTube personalities like iJustine, as well as more traditional press interviews with Associated Press. One of the interesting things to arrive from his Associated Press interview is that the next Mario game could potentially be reserved for the next iteration of Nintendo hardware.

During the interview, the AP reporter asked what Nintendo’s plans are for the future. Miyamoto confirmed that Nintendo has been working on their next generation console and its in the formative stage of design. While talk of a new console may unsettle some fans, it’s very common that work on the next generation begins shortly after the current generation launches. Miyamoto reiterated that despite work on the next console, Nintendo is committed to providing quality software experiences with the current Wii U.

We’re focused on providing a robust line-up of Wii U software for next year.

It seems like we’ve managed to do that this year and people are very happy with what we’ve done on Wii U. For the time being, our focus is on the Wii U hardware, but Nintendo as a whole has groups working on ideas for new hardware systems. While we’re busy working on software for the Wii U, we have production lines that are working on ideas for what the next system might be.

Fans will remember that back in October, Nintendo posted a job listing seeking a console engineer in Redmond, Washington, while earlier this week, Sharp was confirmed to supply the LCD screens for whatever projects Nintendo is cooking up in their lab. Perhaps the most interesting aspect of the interview was the fact that Miyamoto hinted that a future Mario game could be reserved for the launch of the new system, as he sees Mario as a lead character for their work.

Since we first created Mario, people have compared him to Mickey Mouse. I’ve always said Mickey Mouse evolved with each evolution in animation. You saw Mickey Mouse each step of the way.

From early on, I wanted Mario to be that character in the digital world, so that with each digital evolution, he was there to usher in the next era. I think that maybe when we release the next hardware system, you can look forward to seeing Mario take on a new role or in a new game.