Luigi is the braver brother. Mario’s always prepared to crack a few heads in the pursuit of a kidnapped friend, but whenever some actual work needs to get done or the stakes are a little bit higher he just isn’t up to the task.

Who was it who braved some of history’s lamest edutainment to rescue his fallen brother in Mario is Missing? In Paper Mario, while the star of the show was off laughing it up with star spirits and a skanky boo, who stayed at home to do all the actual work of keeping the house clean, checking the mail and basically playing the house-husband like a boss? Who routinely battles terrifying ghosts for no real reason other than that it needs to get done and no other plumber has the gourds to raise a finger? And finally who do you unlock at the end of basically every single-player Mario game when the only tasks left to accomplish are super-hard challenge worlds or death-defying star coin hunts?

Luigi, that’s who. And so it’s fitting that our man in green is the star of what is essentially New Super Mario Bros U’s second quest: an unbalanced, slightly frustrating but ultimately very fun piece of DLC in the form of New Super Luigi U. 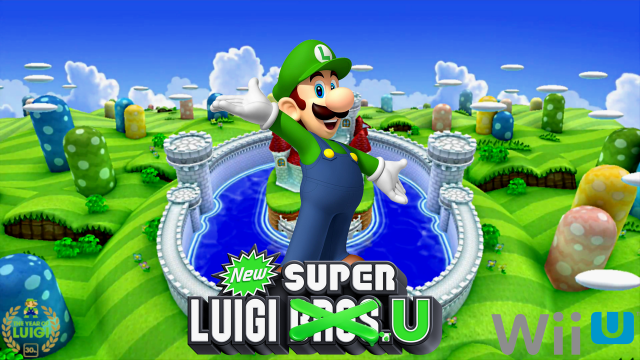 Something old, something new …

A lot remains unchanged since the last time you visited Wii U’s version of the New Mushroom Kingdom. The map is identical, Miiverse works the same, all the boss fights and toad houses are the same and the story â€” such as it is â€” plays out as ever. The gameplay’s been shaken up significantly though as Luigi’s trademark flutter jump and slippery shoes have been reinstated, meaning you can jump farther and higher than before but can’t stop as quickly once you’ve built up a head of steam. A sense of frantic imperative has been instilled throughout the game to, as every level begins with that panic-inducing ‘100 seconds to go’ noise followed by a noticeably quicker version of the background music and the big white numbers tracking the ever-shortening distance to your doom.

Every single stage on the map has been remixed or replaced; redesigned to take advantage of Luigi’s specific style and the arbitrarily quicker pace of gameplay.Â The new levels are all fun and often inspired, but with few exceptions they’re also very short. Most are straight-up cannonball runs that have Luigi sprint from the leftmost section straight through a series of obstacles to reach the goal in record time. Even during the more interesting levels â€” like a vertical platformer with the threat of a rising poison swamp below you â€” it’s hard not to think “Oh there’s the finish. I really wish this course had lasted longer than half a minute”.

That said, playing through each course is a lot of fun and feels different enough from the vanilla game to be refreshing. The designs have a much higher emphasis on quick jump adjustments and managing multiple hazards at once. Star coins are back and this time the designers aren’t fooling around. Getting all three is tough on a lot of the stages, especially since you don’t really have the time to go back or stop. There’s also an amazing Luigi-themed easter egg in every single level, be it a watercolour painting of the man himself by a secret exit, a pixel-art Luigi in a hidden alcove or a suspiciously shaped stone-eye statue with a big nose and mustache. You don’t unlock anything for finding all the easter eggs, they just add a ton dorky and self-aware fun, which is exactly what Luigi himself excels at. 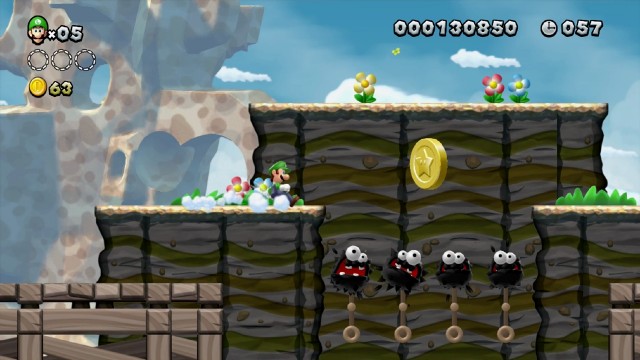 The remainder of the gameplay mirrors what you’d find in New Super Mario Bros. U, although the penguin and propeller suits show up a little more often this time, which is nice.

The most disappointing thing about New Super Luigi U is that although all the additions bring a new twist to an already brilliant game design, a lot of them are at odds with each other. The increased emphasis on precise jumps and good timing are offset somewhat by Luigi’s complete lack of traction, meanwhile the tight time limit discourages players from taking the time to poke around the new levels and hunt for easter eggs or star coins. A lot of the more challenging levels feel like they’ve been designed for expert players to run through as Mario, and Luigi just jumps a little too high or slides off the side of tiny platforms.

The first time I decided I’d actually stop focusing on finishing the level and go off in search of the Luigi easter egg I died from time running out twice in a row before finding it. I have no issue with speed runs, time limits or difficult platforming, but to work really well it needs to feel as if all the gameplay aspects are serving a central vision for how the game will flow, and in this case the different ideas kind of jank together.

Speaking of jank, multiplayer returns in New Luigi U. I was kind of hoping this would be a strictly solo mission for Luigi, but it appears you can’t keep good toads down, and this time they have Nabbit in tow! Nabbit adds a unique edge to the gameplay that was clearly designed for players who’s skill level doesn’t gel very well with the increased difficulty Luigi’s so used to. The rabbit thief can’t be harmed by anything except insta-death pits, lava and poison swamp. This means he can ignore most of the dozens of hazards on screen at any given time and focus on the platforming. 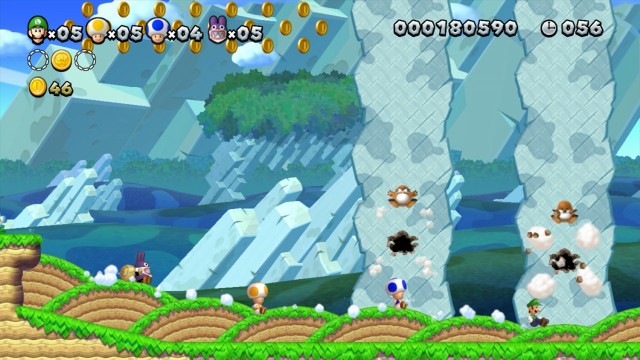 Multiplayer feels a little more out of place in this game than the standard game, since you really can’t screw around with bonking each other’s heads, picking each other up or batting at bubbles. With a few skilled friends though it could provide its own special brand of masochistic challenge.

New Super Luigi U is like the strange parallel world version of New Super Mario Bros U, in which the exact same kidnap plot goes down in the exact same world but this time it’s Luigi who steps up to deal with the situation. Just like Luigi’s the clumsy, frantic, hardcore counterpoint to Mario’s stoic heroism, the new levels are strange, strung-out versions of their former selves with more fire, more bullet bills, more speed and less room for error. They’re a blast to play through, even if they are sometimes a little out off step with the other gameplay tweaks.