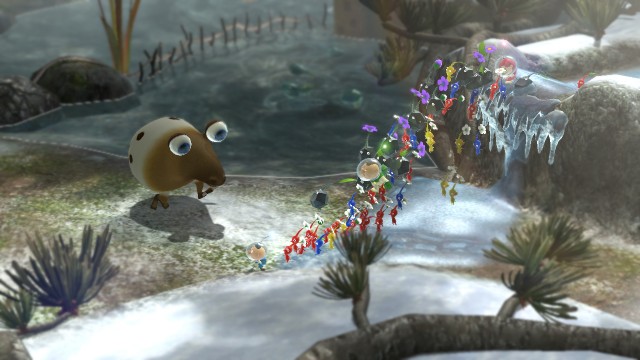 Pikmin 3 has only just released in Europe and Japan, and already its creator wants to add DLC to the game.

In an interview with Itoi, Shigeru Miyamoto stated that, “using the internet [the team] thinks it’d like to add new missions and maps to the game little by little.” In other words, more game play!

Reviews for the game have been very positive, with the only main gripe being the game’s length. The campaign can be completed in less than twenty hours, which some reviewers say doesn’t do justice to the addictive game play.

Perhaps Miyamoto and his team feel the same way as many consumers in that the game could be longer. What better solution is there than to add more content?

Keep in mind that Nintendo has been very conservative with adding download content to any of their games, and whether or not they will do so for Pikmin 3 is still undecided.

Having said that, Nintendo’s conservatism is refreshing, as it seems that, to them, DLC is still an after-thought based on the finished product rather than a long-term strategy done simply to maximise revenue. Let’s hope they maintain this attitude as the demand for high quality games continues to increase.