Shigeru Miyamoto talks to TIME about the Wii U 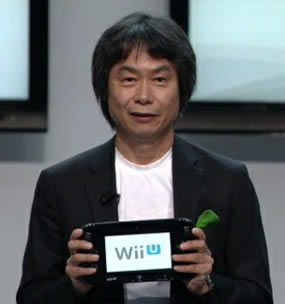 Matt Peckham from TIME recently conducted a phone interview withÂ Shigeru Miyamoto. The first part of the interview was posted today and focused on the inspiration for the console, the console’s interface, and the competition from mobile devices.

One of the highlights of the interview included Miyamoto discussing the performance upgrade the console will be receiving this summer and the future improvements that are going to be made to the Wii U to make it even more enjoyable to use.

We think that by this summer, the system is going to be very much improved over how itâ€™s performing currently. Of course when it comes to the actual hardware, those decisions have already been finalized, and one of the things we focused on in making those decisions was the speed of the connection between the Wii U system and the Wii U GamePad. We strongly feel the transfer speed between those two devices is so strong that itâ€™s not something that can necessarily be achieved by other devices that havenâ€™t been designed specifically with that in mind. So as we get into these other system-based updates, our anticipation is that because of the amount of effort weâ€™ve dedicated to the GamePadâ€™s wireless connection to the hardware, these additional improvements are going to make for an overall device thatâ€™s even more convenient to use.

He also talked about the competition the Wii U faces from smartphones and tablets and why he thinks the Wii U has the advantage.

I look at it from two different angles. One is how you can use a device like Wii U â€” to make an experience that up until now has happened on a single screen â€” into a better and more convenient experience. And I think that the Wii Street U powered by Google application weâ€™ve recently released for Wii U is an example of how weâ€™ve taken an existing application and really enhanced it through the use of Wii U and the GamePad.

I think the other goes back to, as I was mentioning before, the response time between the streaming of visuals from the Wii U hardware simultaneously to the TV and to the GamePad. Certainly from an interactive standpoint, when it comes to interactive content, because of the strength of that streaming capability of Wii U, my feeling is that the more you start to see other devices that are integrating connectivity with smartphones or tablets through special applications, the more that thatâ€™s simply going to illustrate the benefits of having Wii U because of the advantages it has in terms of its interactive elements and how the system streams graphics to the Wii U GamePad screen.

As people are using the system and getting familiar with everything it can do and really learning how to use Wii U and the GamePad, I think the last remaining hurdle for Wii U becomes one of storage in terms of being able to store media. But since weâ€™ve designed the system in a way that allows people to simply add the amount of storage media they need to supplement Wii U, we think it essentially gives people the greatest flexibility within a single device to really make the most of their entertainment in the living room.

Be sure to check out the full interview here. What are some things you’re hoping will be addressed in the second part of the interview? Let us know what you think in the comments below.