Miyamoto says Pikmin 3 is a deeper experience than previous games 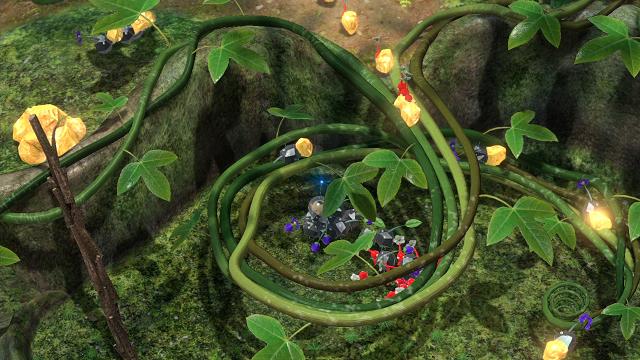 Shigeru Miyamoto is gearing up for the release of Pikmin 3 by talking about many of the aspects of the game with GameSpot. In a recent interview with the site, Miyamoto has discussed the direction the game takes and how it grew from a Wii project with emphasis on Wii peripherals for controls into a Wii U game with a new method of control. Of course, Miyamoto’s primary focus for the game was how new hardware can expand the experience for gamers:

In the case of Pikmin 3, we’ve taken an approach with that game where we really want to take what made the original Pikmin game unique and really simply go deeper with that experience.

And so what we’ve done is by taking advantage of the GamePad–the second screen there–and the HD graphics that are capable with Wii U and the higher processor–we’ve really been able to take that original Pikmin experience and do something that is much deeper and more fleshed out this time around.

…When I create a game, I don’t necessarily always try to approach it from the idea of leveraging every feature or every ability of that new piece of hardware. In the case of Pikmin in particular, the approach that we took was really less of an approach of how can we [â€¦] take advantage of what the Wii U is doing, per se, and instead how can we take what was that Pikmin experience and really make it a deeper experience for players.

So of course we’re taking advantage of the graphics and improving the play control and whatnot and I guess if you were to look at it more broadly, you might not necessarily say that it would be impossible to do it on another system. But I guess speaking plainly, the idea is really that Wii U is the best system to be able to achieve all of the different things that we’re trying to do with this new Pikmin game. One of the biggest features of Pikmin 3 is the fact that you have the map on the GamePad at all times and because Pikmin is a strategy game, it’s the type of game that you might play the same levels over and over again. Having that map–and the fact that you have the three different leaders that you switch between to command your Pikmin–and having the touchscreen on the map will allow you to change perspective or jump to a specific leader and quickly give orders. It makes it much more efficient for you to achieve the goals that you have strategically within the game.

Of course many people want to know Miyamoto’s thoughts on how Nintendo’s new console has been doing, especially with the game drought we’ve experienced for the past two months. Miyamoto admits that the concept of the system is a hard sell for many people, but once people experience it for themselves, they can see the value of the system, even at its current price point.

I think it’s very common for Nintendo products to be the type of thing that until you play it, you don’t really understand how fun it is. Wii had an advantage, because watching people play it looked interesting. When you saw other people playing a game that looked interesting. But even then, it was still the type of thing that you had to play it for yourself to confirm. And once you played Wii, people had instantly a lot of fun. And what that did was reinforce for them that what they had seen was in fact true. Certainly, I think that helped Wii.

From that perspective, I think Wii U certainly has a little bit more of a challenge because it doesn’t have that ‘looking-fun’ element to it. But I think that as people bring it into the living room and begin to play it, particularly when you experience with five people, you really do get a sense for how fun Wii U is. And I think that’s the key; to try to get as many people to try it out as possible. Even with Wii, if people played a game, but it wasn’t fun, it would’t have had the result that it did. So I think the key for us is continuing to focus on the fun of our products.

…I think the key thing is to give more people more opportunity to come in contact with the system and play it. One of the things in Japan that we had been doing, is we had been careful because we wanted to make sure people understood it properly. We had been giving as many opportunities for people to try it out at demo units, at retail, or ensuring that there was somebody there to demonstrate and make sure that they were getting a proper understanding. But I think what we’re finding now is we really just need to get as many people as possible to get their hands on the system so that they can see how fun it is.

Miyamoto has most definitely hit the nail on the head with people not realizing how fun Nintendo products can be until they played them. I was a skeptic myself until I played the system at last year’s E3 and saw first hand how games like Pikmin 3 and The Wonderful 101 are bringing unique controls and in-depth gameplay to the system. What do you think of the interview? Do you agree with what Miyamoto has said and are you excited about Pikmin 3? Let us know in the comments below.