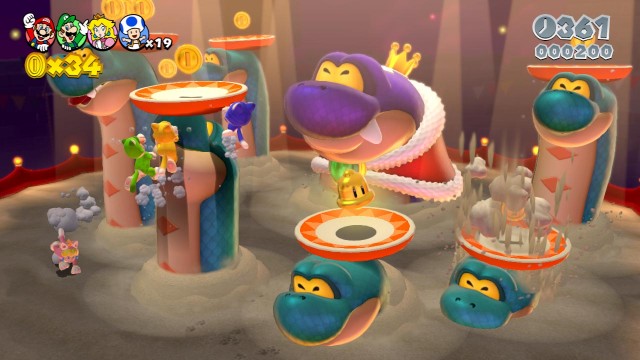 Earlier this year Nintendo announced a new 3D Mario title for the Wii U, and players became tense with hype and expectation. Some anticipated Galaxy 3, others a return to Delfino, and still others felt certain we’d see a revival of Super Mario 64. For once, Nintendo’s safest option was also it’s least considered: a multiplayer evolution of the 3DS favourite, titled Super Mario 3D World.

For some gamers, the official reveal shattered their hopes, at least initially; and most skepticism was met with the question, why did Nintendo choose to play it safe?

Fortunately, Nintendo hasn’t shied away from the subject. In an interview with Mario’s inventor Shigeru Miyamoto, he revealed the direction and purpose behind Super Mario 3D World.

So, what we wanted to do was extend that broader appealing 3D Mario game to Wii U in a way that allows more people to experience it. That’s what we chose for Super Mario 3D World this time. But we still have, obviously, the Galaxy series, and there’s a possibility that in the future we may look to explore what else we can do with the Galaxy series. For us, it was really about trying to find the right 3D Mario space in which we’re going to allow the widest audience to play.

Nintendo wanted to build on the success of Super Mario 3D Land by enabling simultaneous multiplayer within that same fun, easy-to-play, three-dimensional space. And yet, many of us don’t buy Mario games so we can jump around with three other players. We simply enjoy the exploration, the challenge, the quirkiness and, most of all, the masterful level design. Naturally, Miyamoto was asked if he and other developers intended for the franchise to include multiplayer as a standard. He said,

Â When the New Super Mario Bros. team on Wii was able to do that and include the four-player multiplayer in the side-scrolling fashion, we very quickly found that our team really liked that, and they immediately said, “Well, we want to do the same thing in a 3D Mario space.” They’ve had a lot of fun exploring that. But definitely with the single-player Mario experience, there’s still a lot of possibilities that we can explore, so I think we’ll probably go back to that again at some point.

Few people disagree that Super Mario Galaxy 2 was a vast improvement over its predecessor, so hearing that a third iteration could be developed is good news indeed. It’s needless to say that Super Mario 3D World looks to be a great addition to the Wii U library, and I’ll certainly be picking up a copy.

For now, Nintendo’s aim is to create a game that’s fun, easy to play, and paints a vibrant picture of Nintendo’s identity as a developer of great software and hardware. My own secret hope, however, is that 3D World is the testing grounds for whatever comes next; you know, like Windwaker HD and the inevitable Zelda U.