Something I’ve heard from a lot of gamers who owned both a Wii U and now the Nintendo Switch is that Mario Kart 8 Deluxe doesn’t interest them because they’ve already played the game on the Wii U. Not only that, the cost of getting a multi-person set-up going on the Nintendo Switch is a bit rough to stomach when you consider how many people the game supports and how many extra controllers you need.

However, that sentiment doesn’t seem to affect how GameStop feels about the possibility of sales for the game.

â€œMario Kart without a doubt will be huge. We know the interest from previous sales of Mario Kart, and we know that Mario Kart on the Switch is going to extend that.â€

Traditionally, Mario Kart has always been a series that has performed well for whatever platform it was on, which became painfully obvious when the Wii U version went on to sell more than anyone expected. 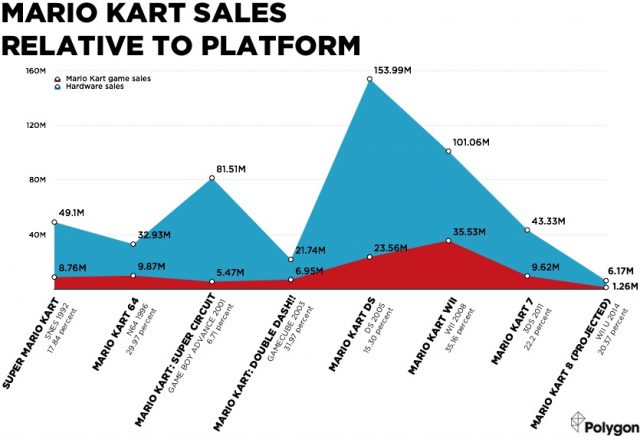 Remember this chart from Polygon that purported to show how Mario Kart 8 would likely be the worst-selling game in the franchise due to the Wii U’s low console sales? VGChartz is no where near accurate when it comes to game numbers, but it has Mario Kart 8 at 7.34 million sold to date.

Mario Kart 8 was a massive success on the Wii U and it makes sense that Nintendo would want to translate that success to the more successful console that fulfills their original vision for a console that’s capable of also being a portable. So regardless of how hardcore Nintendo fans feel about Nintendo “recycling” games, Mario Kart 8 Deluxe as a near-launch title for the Switch will help it become more popular than the Wii U ever was.

Mario Kart 8 Deluxe will be out on Switch on April 28th.