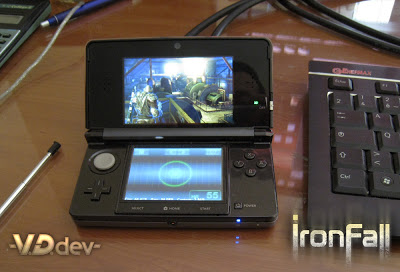 Little has been revealed about Ironfall, an indie FPS title in development by VD-Dev, but what we do know sounds very promising.

Ironfall is the first independent title in development by the publisher, though, when they worked for Ubisoft, they were the brains behind the technically impressive DS title, C.O.P the Recruit.

Like C.O.P the Recruit for the DS, Ironfall stands out from most 3DS titles. In an interview with Nintendo Everything, VD-Dev discusses not only ground-breaking graphics for the system, but also how they aim to have the game run at 60FPS, with or without 3D.

But if frame rate drops, we donâ€™t want to sacrifice the amount of IA, and graphics we have on screens just because of the stereoscopic view (sometimes we have to draw 3 screens, 1 for the left eye, 1 for the right eye, and 1 for the bottom screen where action will also take place sometimes. So maybe we will add a feature that allows, in REAL TIME, the player to switch from 60 FPS with the 3D slider pushed down, or 30 FPS with 3D slider pushed up (no need to go to some menu).

Furthermore, Ironfall sports a custom-made engine that VD-Dev hopes will get the most out of the system.

The engine used in Iron Fall is called the â€˜Big Bang Engineâ€™. It’s an engine we have programmed from scratch and is optimized for the Nintendo 3DS. It took us several months to write (days and nights), and is written fully in assembly code, using all the ARM optimizations we know. We also have written our own graphics driver for communication with the 3DS GPU to get the best of the handled graphics processor (well at least we hope) . The engine has many features, more on this will be shown on a video available on the 28 October.

VD-Dev has revealed little more in the way of screenshots than the off-screen picture you see above; but based on their word, we can expect only good things to come. On the topic of release date, the publisher added, “The game will be released when weâ€™ll have 100% satisfaction about it. Spring 2014 should be a possible release date.” Sounds good to me!

Excited for Ironfall? Let us know in the comments.