It’s barely possible that my recent predictions on Nintendo’s E3 could have been any more wrong. A generous tally would see only two of my nine hopeful forecasts actually addressed during the opening Nintendo Direct, but much more surprising is the non-appearance of something most of us had considered a safe bet.

Nintendo had previously announced that a new 3D Mario platformer would be shown and playable during E3. The question on many fans’ minds was whether it would be a continuation of the Galaxy series, a return to an open hub like 64 and Sunshine, or something completely new.

Certainly, the new Mario platformer would have at its core a convincing argument for Wii U’s existence as a game console. Super Mario 64 proved the analog stick. Super Mario Sunshine made use of Gamecube’s superior graphical power and controller innovations, and Super Mario Galaxy convinced us all that the Wii remote could fit naturally in a triple-A game without feeling gimmicky or tacked-on. Indeed many Nintendo hardware innovations seem custom-made for the Mario game they later reveal.

When the Wii U game turned out to be a four-player version of Mario 3D Land plus cats, I must say I was pretty disappointed. Truth be told, I was livid. Not only was I not getting the game I’d hoped for, but in my mind Nintendo had completely dropped the ball with one of their few major chances to get non-Wii U owners’ attention and sell the hell out of the thing. What were they thinking? 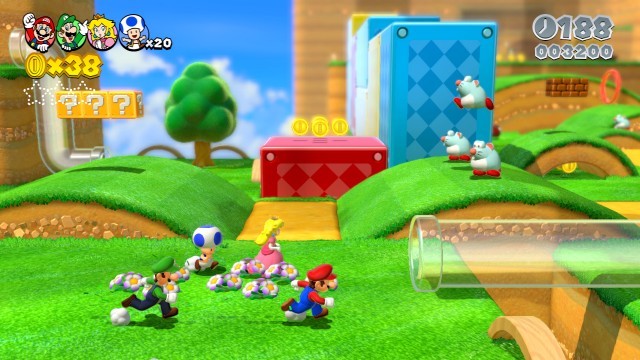 Luckily that was a few days ago, and since then I’ve watched the trailer over a few times and gained some perspective. What was Nintendo thinking? Here’s a possibility:

There are 28 million more 3DS units out there in the wild than there are Wii U units. Even if you assume every Wii U owner has a 3DS and only a third of 3DS owners have Mario 3D Land, that’s still 9.3 million people who know how good that game was but don’t have a Wii U yet.

We all know how difficult it is to explain to somebody the gamepad’s benefit to gameplay when they haven’t used it before. Nintendo’s upcoming first-party software says to me that they still haven’t figured out how to communicate it either, and so they’re focusing on giving potential consumers something they can relate to. 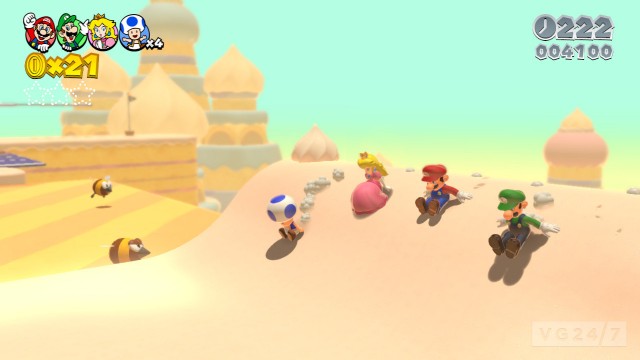 Obviously a new game the scope of Mario Galaxy would appeal to us, gamers who rushed out and got a Wii U as soon as they can, but to be honest we’re all going to get 3D World as well. The game looks really, really fun. But for the Nintendo fan who doesn’t have a Wii U yet, a demographic which we’ve already posited must be in the millions, a much-enhanced continuation of gameplay ideas they already know and love is a pretty smart proposition.

3D World is positioned as a 3D Land that makes all the refinements and additions simply not possible on 3DS â€” four player simultaneous play (which I’m actually excited for now that it’s on a 3D plane and I won’t be constantly jumping into other players’ feet), HD graphics, and crazy Galaxy-style theme levels like the ice-skating shoes and dragon rides seen in the above trailer.

The same goes for Mario Kart 8. The name alone proclaims it to be a direct follow-on from the 3DS game, but boasting much improved graphics, crazier level design, enhanced network play and of course brand new tracks and characters. 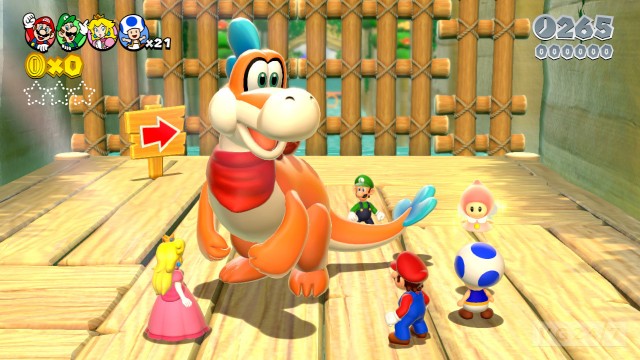 We all expected games that prove the specific gameplay potential of Wii U. Those games would convince consumers to run out and grab a Wii U right now, adding much-needed numbers to Nintendo’s tally board. All that is assuming, however, that the potential can be communicated through videos and messaging. The Wii U needs a decent install base of actual gamers to evangelise the system and explain to their more casual friends what the appeal of the gamepad is. Maybe it’s smarter to leave the big gamepad and Miiverse ideas for now and focus on gameplay that’s immediately accessible to people through trailers. Gameplay that people can see and immediately want. Especially when Nintendo knows there are millions of people out there who have already played and loved similar games to these, but haven’t yet found a reason to pick up a Wii U.

What do you think? Will Nintendo’s presentation of 3D World draw more new Wii U owners than a new Galaxy? And more importantly are you personally excited to get your hands on the game?