Early BoTW builds had a stamina regen mechanic for climbing 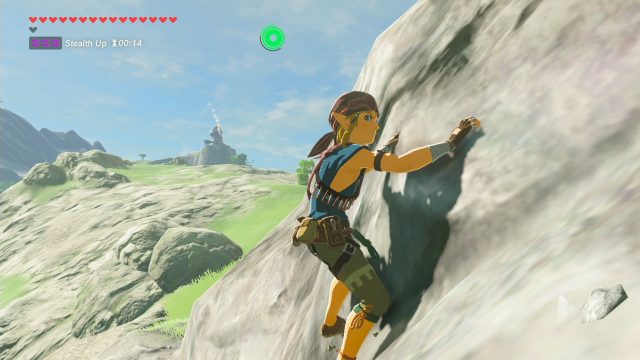 Now that we’ve all had our chance to experience Breath of the Wild, some interesting interviews are revealing what could have been for what’s arguably the best Zelda game I’ve ever played. A new interview with the art director and game director reveal that an early concept for the game was a way for players to regen stamina as they’re climbing.

As you know in Breath of the Wild, you can literally climb anywhere so long as your stamina wheel can get you there without running out first. The idea was that players could stab their weapon into the cliff face and then rest on it in order to regain stamina. Art director Satoru Takizawa explains that it was Miyamoto who decided the mechanic was no good.

Another idea is that itâ€™s very hard to actually stab a sword into a big piece of rock. We considered that you can stab them into cracks or crevices in the wall, but then you canâ€™t freely use that feature anywhere you want, so I decided not to implement it.”

The two devs say that they were in constant contact with Mr. Miyamoto nearly every week to discuss what they’ve been working on because if they didn’t include him in the process, the tables could be turned on them in the presentation when they find out he didn’t like the idea.

What do you think about this stamina regen mechanic and Miyamoto’s excuse for leaving it out? He says that you can’t stand on a weapon that’s embedded in a crevice of rock, but I also think you’d have a hard time hauling 30 stamina potions up a mountain to quaff them when your stamina wheel is about to run out.