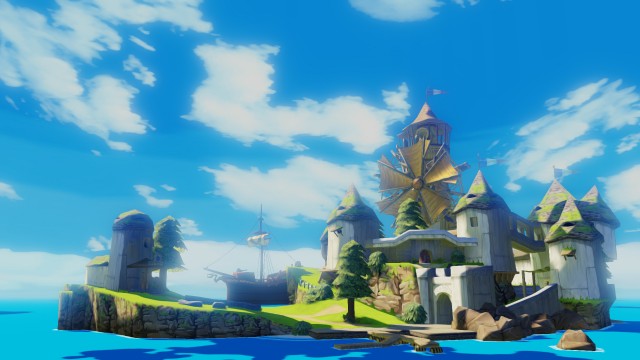 With the newly remastered Wind Waker HD headed our way on October 4th, there’s been a lot of interest in talking to series producer Eiji Aonuma about the development of the original series. In a recent interview with MTV Multiplayer, Aonuma says he kept the art style hidden from creator Shigeru Miyamoto for as long as possible since the art style was such a drastic change from what the series had previously looked like.

â€œWhen we were first working on the toon shaded Link, and that graphic representation of the Hyrule world, because it was such a drastic change, we actually kept it a secret from Mr. Miyamoto in the beginning. We had actually recently shown an example of what the next Zelda might look like, based on the â€˜Ocarina of Timeâ€™ graphic style, and because this direction was so different, we knew that Mr. Miyamoto wouldnâ€™t approve it as it.

So, I worked with my team to at least get it to a point where a battle sequence between Link and a Moblin would actually work in this world, and then that was the first time that we brought it to Mr. Miyamoto. That was only time we felt comfortable bringing it to Mr. Miyamoto.

â€œItâ€™s not as though we were consciously keeping it a secret, but when Mr. Miyamoto would say, â€˜Hey, you got anything to show me?â€™ I would kind of just push him off, and buy time as much as I could. But, at the same time, I think Mr. Miyamoto also understood that we were working on creating something, and just werenâ€™t ready to show it to him yet. Honestly, I donâ€™t know how well we kept it a secret anyway.â€

It’s interesting to see that the development of Wind Waker was such that even Aonuma’s team felt like it wouldn’t be well received by the series’ own creator. For many people, the cel-shaded graphics are often cited as the reason they didn’t play the game, because it diverged so much from the series as a whole. Did you play Wind Waker when it was a Gamecube title? How do you feel about the cel-shaded graphics? Let us know in the comments below.