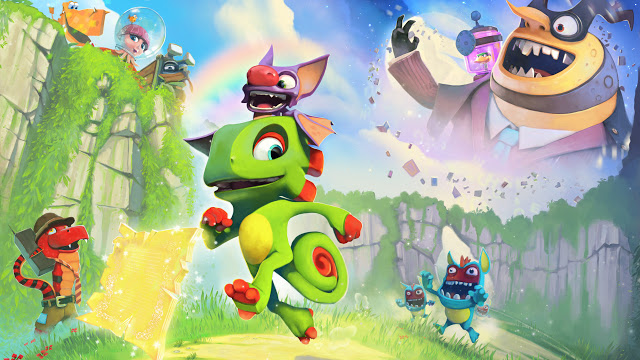 We’ve known for a while now that Yooka Laylee is no longer coming to the Wii U, but today we got the official confirmation from Playtonic Games that the game is appearing on the Nintendo Switch.

A new Kickstarter update has been issued to backers to let them know that there are several options available when it comes to redeeming the would-be Wii U option. Wii U backers can change to the Nintendo Switch copy of the game, but there’s no firm release date for that version of the game. The Xbox One, PS4, and PC version of the game will debut on April 11th, so you can switch to one of those if you prefer to get the game sooner. Here’s what the update to the Kickstarter page says about exchanging the Wii U version for different ones:

We continue to work closely with Nintendo on plans for a Nintendo Switch version of Yooka-Laylee and more details will be revealed in the future. We’d like to thank our many Nintendo fans for their continued patience and understanding while we form our plans: we hope to make your platform of choice a great place to experience Yooka-Laylee in the future!

Note: Upon release, the Switch version will be delivered to backers via digital game codes and thus no additional upgrade cost is required.

Forthcoming options depending on your current platform choice

When we unlock your survey through BackerKit, Wii U backers will be able to do one of the following:

It’s nice to see the game confirmed for Nintendo’s next platform, but it’s a shame that Wii U owners won’t see the game. Still, it’s not surprising given that the team at Playtonic has gone on record stating that the Wii U version of the game was incredibly hard to develop.