Wii U, virtual console and 50Hz: why is it still a thing?

Regardless of whether you live in a PAL region or an NTSC region, you’ve probablyÂ caughtÂ wind of some recent discussion about virtual console and the difference between 60Hz and 50Hz versions of old games.

The issue is that back in the day televisions manufactured in Europe and Australia displayed signals at 50 frames per second, as opposed the 60 frames in the US and Japan, and the video game machines and cartridges were designed accordingly. Some games simply ran 17 per cent slower, including player movement and background music, while some games were manually altered or sped up to better fit the slower speed (with varying degrees of success).

Now that televisions the world over are capable of processing the same signals, Nintendo can just release the 60Hz versions everywhere so we all get the best version, right? Well, no. The Wii virtual console was almost entirely made up of 50Hz versions. Some of the games, like Donkey Kong Country, were pretty well optimized back in the day so it wasn’t really noticeable. Others, like Mario Kart 64, were altered after the fact by Nintendo to make sure they were up to par.

Many fans were hopeful that Nintendo would see the light when re-releasing games on their new HD system, and that the Wii U would see 60Hz releasesÂ globally. After the first few 30 cent games turned out to be the slower releases though (including Balloon Fight and Kirby’s Adventure, which are completely compromised at 50Hz), people took to Miiverse and petition sites in droves to voice their displeasure. 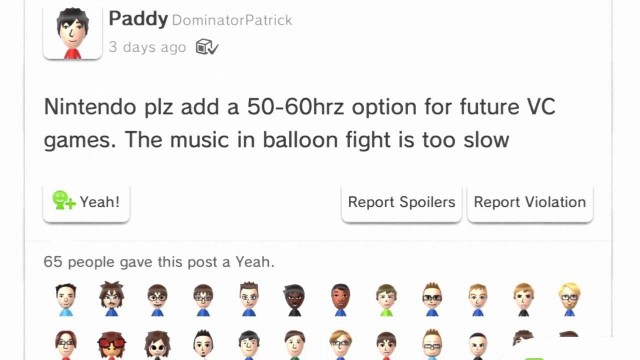 With the full release of virtual console on Wii U it seemed times had changed, with many games running at their full framerate. The problem is, not all of them have recieved the same treatment. The NES port of Pac-Man is 60HZ, while Kirby is 50HZ. F-Zero is 60Hz, but the just-released Super Metroid is not. So what gives? What possible reasons could Nintendo have for not just making the original versions available for everyone?

Well first on the possible rationale list is the issue of localisation. Even in the NES and SNES days, games were altered by their regional representatives of the developer or publisher to make sure the experience suit the locale. What if a game only supports English in the US but has support for various languages in Europe? What if the game has significant branding or character nameÂ differencesÂ between regions? Nintendo’s hardly likely to retrofit a NTSC ROM with European translations or differences, so the easiest thing to make sure the game is accessible is to justÂ releaseÂ the PAL game in PAL territories.

Or maybe Nintendo just wants to make sure the games are as theirÂ audienceÂ remembersÂ them. Nostalgia is after all the main appeal of virtual console, and it’s possible a player could be turned off if they repurchased a beloved game from their childhood only to find it was much faster than they remembered and difficult to play. I know the first time I heard the Balloon Fight theme in proper speed I was completely freaked out, and trying to play the original Super Mario Bros or Lost Levels in 60Hz after a lifetime playing them differently is incredibly jarring.

Thirdly there could of course be issues at play here beyond the purely technical. For instance are there any European countries that would frown upon Nintendo releasing versions of old games that differ from that which was originally rated and released in that country? Does Nintendo need to get each virtual console game rated and approved by the various global classification boards, and if so is it more difficult for them if the game is different? I can’t imagine this is the case, but then again we have already seen the lengths Nintendo will go for cultural sensitivity, the company having previously put locks on the times during which violent content could beÂ viewedÂ on the eShop to comply with German law (this move was later reversed).

Finally perhaps Nintendo is simply concerned that some Australian or European fans are still using televisions incapable of displaying a 60Hz signal. Okay so that seems overly-considerate in the extreme, but then again this is Nintendo.

So now that we’ve taken a second to think about Ninty’s possible reasoning in keeping arbitrary restrictions of the past alive, we can have a look at why insisting to onÂ continuingÂ to release 50Hz games is clearly ludicrous.

First of all the content of NES and SNES could not possibly have been altered in any significant way between regions. I appreciate that my PAL version of Super Metroid has French and German subtitles included, but there’s like 20 lines of dialogue in that entire game. Put it in the manual if you have to. If you’re a native French or German speaker who can’t stand havingÂ incomprehensibleÂ English text for the first two minutes of Super Metroid, I think you’reÂ probablyÂ playing the game for the wrong reasons. In fact Kirby’s Adventure probably has more overall written word than Super Metroid and there’s absolutely no support in the Wii U version I have for a language other than English, it’s just the same game as in North America but with borders and slower enemy animation.

Speaking of Kirby, that brings me to the point about ratings and legality. While I guess it’s possible Nintendo has extra hoops to go through whenÂ releasingÂ an NTSC version of a game into a region where only the PAL version was previously released, they’ve already shown they can do it on several occasions. NES games on the 3DS virtual console run at 60Hz for example. Super Mario World on Wii U runs at 60Hz, which makes the release of Super Metroid in 50Hz even more baffling.Â Remember also that Nintendo just released Mario’s Super Picross for PAL audiences, a game that was never released here before and is entirely in Japanese! Getting foreign games a local release certainly seems pretty easy, so why not do it if it means better performance?

The fact that fans might be confused by a game that runs significantly faster than they remember it is a legitimate concern, but again why would some games be releaseing in on format and some in the other? If it’s so easy to release Super Mario World in 60Hz, why not just give Wii U owners a choice in which version they buy or have a disclaimer that says “This US version of the game may run faster than the PAL version found on cartridges in your country”?

The biggest problem with the speed of games being released on Virtual Console here in PAL territories is a problem we often have with Nintendo generally â€” we just don’t know what the heck is going on.

Is it a case of not wanting to ruin the nostalgia? Then why have some at 60Hz and some not? Is it more difficult or expensive to release 60Hz games in PAL countries, and so it’s only really worth doing if there’s a huge improvement? Are there specific games that just can’t make the jump for complex rating, licencing or technical reasons we don’t know about?

The most important thing Nintendo can do for their fans is simply to beÂ transparentÂ and shed some light on why these seemingly crazy decisions need to be made. Just tell us we can all get off your back and make informedÂ purchasingÂ decisions. Until I know the exact reason behind these decisions, I don’t know if I’ll be comfortable paying full price for an old game that I can most likely find a faster version of on another platform.

What do you think PAL players? Is playing games in 50Hz a buzzkill for you? And all you lucky NTSC guys and girls, if you knew there was a superior version of all your old favourite games out there, would you want to play those or would you want to hold on to the versions you remember from childhood?