Back when Shin Megami Tensei x Fire Emblem was initially announced, I was extremely excited as a fan of both series. But as I saw the game morph into what would become Tokyo Mirage Sessions #FE, with a focus on becoming a pop idol, my hype began to diminish.

Now that Iâ€™ve finally got my hands on the game, I can confirm that it is certainly different than what I had expected, surprising me in many ways. Check out my full review below.

The game takes place in modern-day Tokyo, even using real locations to add to the immersion. In this world, idol life is everything. Everyone you talk to just canâ€™t seem to shut up about their favorite performer. With creative juices flowing so freely, a new threat rises to take advantage.

Rogue spirits called Mirages invade the world to harvest peopleâ€™s Performa, essentially, theyâ€™re creative spirit. To combat this, you and your party must take the fight to the spirit world known as the Idolsphere to thwart this ghastly invasion.

The Mirages arenâ€™t all bad however, as some will team with your party to fight alongside humanity, linking to individual party members in a Persona fashion. Fans of Fire Emblem will notice that these Mirages are actually mainstays from the series. While new designs make them tough to recognize, their personalities, weapons, and fighting styles remain largely intact. 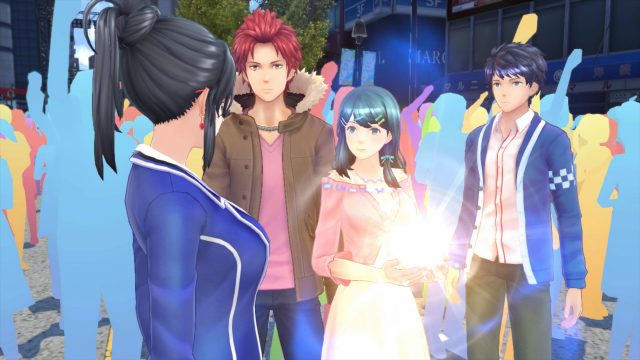 This is a very story-centric romp. Dialogue sequences can easily go on for fifteen minutes before allowing you to get back into the action. The quirky, light-hearted writing is entertaining, albeit very cheesy, but so much of it can drag after a while. Fortunately, you can fast-forward and skip through these sections if you just want the story highlights or to bypass a section entirely. On the other hand, the fully animated cutscenes are beautiful and truly a treat to watch. Youâ€™re often rewarded with a stage performance by one of your party members after completing a section, and theyâ€™re all magnificently crafted.

Now, there are many paths on the road to becoming an idol, and you can help your party members follow their dreams through side quests. Side quests in Tokyo MIrage Sessions FE are largely character based. A quest will center around an individual character giving you more insight into their backstory as well as what drives them as a performer. Besides bringing more life to the characters, completing these quests often unlocks a new Performa for that character allowing access to new abilities. These can be game changing in terms of power, so itâ€™s recommended to complete each characterâ€™s side quests to obtain more combat options. 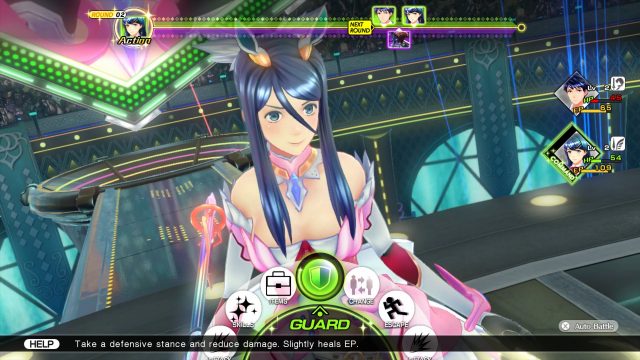 Locations in the Idolsphere act as dungeons. Traversing through them is akin to the Shin Megami Tensei series. There is some light puzzle solving that typically feels tedious rather than challenging, often requiring you to backtrack multiple times just to interact with something. As you progress through the Idolsphere, Mirages randomly appear and come after you. If they touch you, a battle sequence will begin. You can attack them first to get the upper hand in the ensuing battle, or to avoid them entirely. There are also darker apparitions that are not affected by your attacks, and if they touch you will initiate a â€œsavageâ€ encounter. Enemies in these battles are disproportionately difficult for the dungeon, and will likely wipe your party with ease. These should be avoided unless exploring a dungeon youâ€™re out-leveled for.

Speaking of wiping your party, each dungeon typically consists of a mid and end boss. These will act as power level checks for your party and require you to maximize your damage potential on every turn to succeed. Do not be surprised if you find yourself breezing through a dungeon only to run into a boss that one-shots your party members. With huge damage output and health bars, combined with plenty of powerful abilities, these encounters can feel a bit cheap at times, and will probably require several attempts, and/or lots of grinding to overcome. 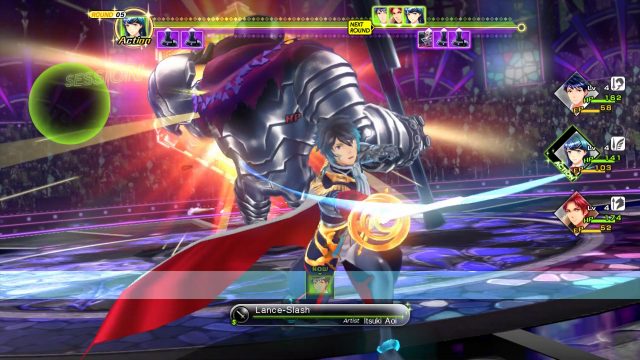 Combat works like a traditional turn-based RPG, but with many twists. Most notably, the Sessions mechanic, which triggers whenever a party member lands an attack that an enemy is weak against. This causes fellow party members to also strike with their corresponding Session abilities, in a sort of chain attack. This adds an entire layer to the gameplay, as youâ€™re not only looking to outfit your party with strong attacks, but finding out which attacks will trigger the most Sessions out of your party members to get the most damage out of every move. Also, Sessions can be triggered by enemies. So, as you battle the various enemy types, itâ€™s important to note which will trigger their own Sessions, so you can focus on taking them down first.

And enemy Mirageâ€™s arenâ€™t the only oneâ€™s doing some harvesting, that is also a two-way street. By defeating enemies you will obtain their life force, which can be used in recipes to gain new abilities and craft more powerful weapons. Each character can acquire a fair number of weapons, but itâ€™s not about just upgrading and equipping the best one. Every weapon can be leveled up giving the wielder more skills and abilities. For this reason, itâ€™s wise to level up each weapon to â€œmasteredâ€ level so that you can get all the abilities out of it. I suggest equipping weapons you havenâ€™t mastered yet when grinding lower level enemies.

These are just some of the many systems that make it easy to dump dozens of hours into this game, and you will keep getting introduced to more throughout the story. Be prepared to learn entirely new mechanics even 20+ hours into the game 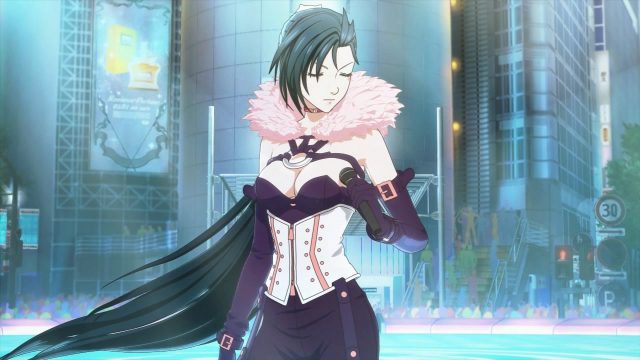 While your partyâ€™s journey to become major stars while ridding the world of these heinous Mirages will have its ups and downs, the world itself is astoundingly beautiful throughout. Atlus brings the anime artstyle theyâ€™re known for to make it feel like youâ€™re playing out your own show. The color scheme focuses on mostly on bright neon colors that allow characters to pop, while supporting the flashy lights and wild sets that accompany the idol theme. Battle animations are over-the-top, and witnessing a well-placed chain of Session attacks is just as rewarding as watching the targeted enemy’s life bar deplete. Also, itâ€™s worth mentioning again, the cutscenes are stunning.

Most allies and enemies are imported from the Shin Megami Tensei and Fire Emblem series, but are almost unrecognizable as theyâ€™ve been heavily altered to suit this world. The new designs are superb and itâ€™s fun to see how they subtly reflect the original characters.

The game also borrows many of the sound cues from both the series it represents, everything from attack sound effects to leveling up tunes will feel familiar to those who have played previous games in each series. And this is all accompanied by fast-paced J-pop inspired tracks that act as the cherry on top of immersing you in this entertainment environment.

In terms of GamePad use, Atlus managed to use it in a way that adds to the experience without being intrusive. The GamePad acts as your cell phone. Functions include a means to text with other characters in the game to further the plot, I will say the text conversations are pretty good too, characters use just the right amount of abbreviations and emoticons to feel natural, and it also acts as a live map. I always enjoy when Wii U developers can find ways to get some of the clutter off the screen and on to the GamePad, without hindering gameplay, and this is a fine example.

Of course, I couldnâ€™t feel this review was complete without addressing the watermelons in the room. Yes, itâ€™s true that many sweater yams were oppressed through censorship to make this game â€œsuitableâ€ for western audiences. For the most part, this doesnâ€™t have much impact on the game, though I felt the photographer segment seems a bit odd in the censored version. Even so, some of it looks pretty dumb. One boss, Aversa (pictured above), constantly has a smoke cloud over her chest which may as well be a blur effect.

If weâ€™re being honest, bringing these games to the west is mostly fan service. Itâ€™s highly unlikely that your average consumer is going to be picking this game up, so I donâ€™t understand why developers insist on making these alterations that those who are actually going to buy the game strongly oppose. At the very least, the uncensored version changes should have been made available as free DLC, with an age gate attached to it. But keeping the original vision away from the largely purist fan base is just nonsensical.

In the end, Tokyo Mirage Sessions #FE was far from the game I was hoping to get out of this crossover, but Iâ€™m glad I did. If it werenâ€™t for the game starting out as SMTxFE, I may have passed on this game entirely, missing out on a quality experience. Itâ€™s still hard to recommend such a title to those who arenâ€™t accustomed to JRPGs, but anyone who has considered taking the plunge into the genre should consider this game based on the combat and upgrade systems alone. Add on top of that, this crazy ride to becoming superstar, and you have an experience you just wonâ€™t find anywhere else.