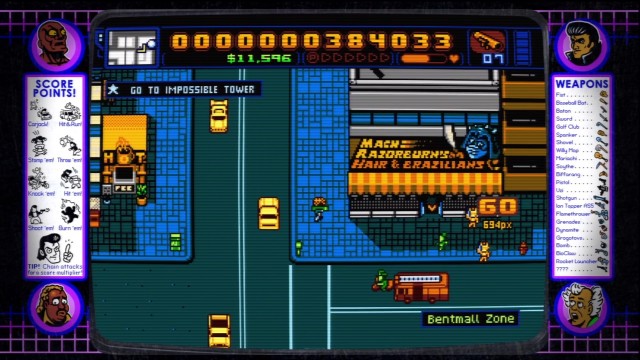 Retro City Rampage developer Brian Provinciano has posted a lengthy blog post on his website detailing why the Wii version of Retro City Rampage will never see a port to the Wii U. Plenty of fans have been asking when he plans to port the WiiWare version of the game to the Wii U, since the game is currently available on nearly every single gaming platform available. Provinciano created the post in order to help explain why the Wii U version of the game will never see the light.

According to him, the effort in porting the WiiWare title to Wii U would not be worth the investment, considering he has not made a single dime on the WiiWare version, thanks to Nintendo having a pay-out threshold that has to be reached before they will give developers the money they’ve earned on the platform. Aside from that though, Provinciano mentions that the time it would take in order to port the code means time diverted away from other aspects on a port that has not made money.

Unfortunately, Wii U is a completely different system from Wii. Wii code cannot be simply put on Wii U with the push of a button. Itâ€™s different architecture, a different SDK/API, with different platform requirements. Developers must deal with game ratings (PEGI, ESRB, etc.), business/paperwork/production, e-manuals, icons, store assets, localization, testing, certification, a new round of marketing, etc. â€” it wouldnâ€™t be trivial and would take months from start to finish. In the end, it would be 95% identical to the WiiWare version.

Plenty of people don’t think about the administrative tasks that come with developing a game, but according to Provinciano, he actually receives more requests for a Wii U port of the game each week than sales on the WiiWare platform. He goes on to mention that the game functions just fine in the Wii mode of the Wii U, so if you really want to play the game on the Wii U, that’s the best place to do it.

Further more, the Wii version still hasnâ€™t made me a cent due to the threshold requirement. I get more requests for a Wii U version each week than actual WiiWare sales. I really would hope more of you would show your support and purchase it via Wii mode. It would be win-win.

It’s always difficult when games we want to see on a platform aren’t cut out for it, but given this reasoning it’s easy to understand why Brian doesn’t want to put the effort into porting the game. He’s had no return on his initial investment in the Wii, which was the best-selling platform of last generation. The Wii U is currently in third place this generation and the effort to port versus the sales generated would not be worth the time investment.

Sorry folks, this one will remain a WiiWare title.