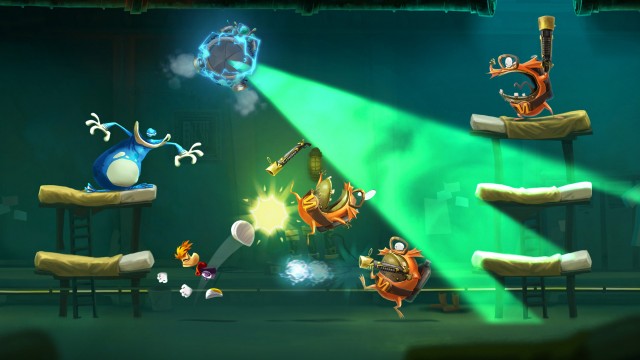 If you buy one game this year, make sure it’s Rayman Legends. The rest of this review is here to convince you why that statement is true, but believe me when I say it’s more than a little redundant. Despite the six month delay for the title to become a multi-platform release, Michel Ancel and his team at Ubisoft Montpellier have created a one of a kind experience that deserves to be played.

Rayman Legends is like a bigger, grander Rayman Origins. Everything that made the 2011 title a stellar experience is back with more polish, more levels, the same amazing artwork aesthetic, and challenges that’ll have you pulling your hair out. Just about everything from the original Origins release has been improved and polished to the point that fans of the first game will be overjoyed, while newcomers to the series will find a polished experience not unlike what Nintendo usually provides. 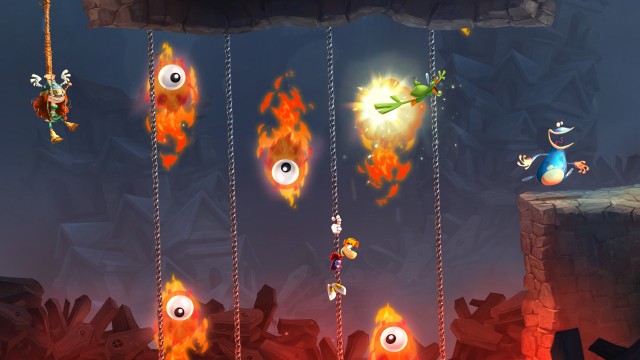 The basic premise for the game sees Rayman and pals setting out to rescue Teensies who are being kidnapped and stored throughout the levels. You’ll need to use a variety of moves, with some utilizing the Wii U GamePad in ways that I haven’t seen in an original title since last year’s ZombiU. It seems Ubisoft Montpellier understands how to utilize the GamePad’s unique second screen feature more than any other developer out there, as swiping platforms and smacking baddies feels nothing but natural.

Rayman Legends is at its heart, a fast-paced 2D platformer that requires precise movement. This is something that relies on controls more than anything to get right, and the team at Ubisoft Montpellier have done a bang up job making sure the game feels responsive and that every action you perform responds immediately to button presses. The last game I played that felt this responsive was Team Meat’s Super Meat Boy.

The gameplay itself is designed to be challenging but rewarding, as there are numerous ways to traverse the levels and if you want 100% completion for all the stages in the game, you’ll need to replay them while exploring every nook and cranny, avoiding devious traps, and learning each unique mechanic that makes the boss fights in the game a joy to play. On top of that, the levels designed with touch control in mind are such a pleasure to play that Rayman Legends is an exemplary example of what could happen with the Wii U’s touch screen. The shocking thing is that it’s not a Nintendo title to display that potential. 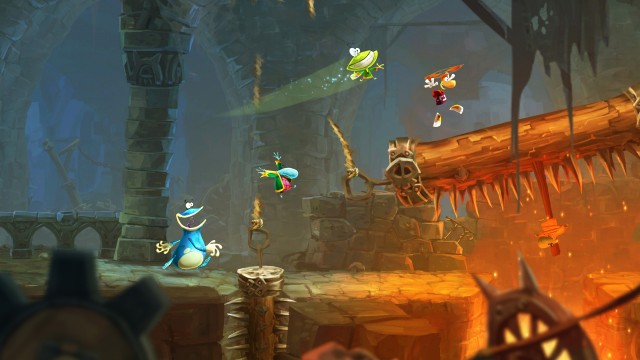 Touch-screen levels have you controlling the action in a more indirect manner, as you must swipe platforms, rotate the GamePad in order to create paths, and blast enemies with your fingers so the character you’re guiding can progress. I didn’t experience any problems with the AI controlling the character aside from one or two bungled jumps that led to the death of the character, but given the fact the game was so responsive to my touch screen inputs I was more than willing to forgive these few errors on the AI’s part. After all, who hasn’t missed a platform jump now and again?

If you have friends over you can avoid the issue entirely, as the game supports up to 5 players in co-op that quickly becomes just as hectic as what you’ve probably experienced in New Super Mario Bros. U. Drop in and drop out co-op make adding additional players a breeze, so if you happen to be jamming to the game and friends stop by you can get them in the game without having to back out and create games specifically for them to join in.

Rayman Legends is simply a treat to experience in both audio and visual aspects, but special levels in the game require the player to tune their movements to the music and rhythm of the song. This might sound groan-worthy in theory, but in practice it’s much more fun than can be described. The music is outstanding, the levels feel right and if you’re not shaking in your seat by the end of the level, you’re doing it wrong. These rhythm-based levels were one of the major highlights of the game for me, as it’s one of the few instances in gaming today where music is so solidly incorporated into level design.

The general aesthetic of the game follows that setup in Origins, though each level hub you encounter is loosely based around a concept, such as a fairy tale or urban legend. The levels felt distinct enough that I never felt as though I was revisiting the same place over and over and while the challenge modes reuse some of the art assets from the main single player game, some of that is to be expected given the circumstances.

I touched on the multiplayer aspect of Rayman Legends a bit in the gameplay section because it’s nearly impossible to separate the multiplayer aspects of the game from the single player. That’s certainly not a bad thing, as challenge mode will have you going head to head against your friends on Miiverse to see who is better at specific challenges.

Speaking of Miiverse integration for this game, it is one of the better experiences I’ve seen on Wii U. Some games like Resident Evil: Revelations contained token Miiverse support that was interesting, but Rayman Legends actually involves the community and your friends to the point where you’ll find yourself replaying challenges and levels in order to try to best yourself and your friends. This is the kind of competitive experience I like to see games inspire, as it brings out the best in everyone. Couch co-op is just as viable as playing through the challenge modes as well, so don’t hesitate to get your friends involved. In my home the Wii U has become something of the party machine. When friends come over everyone is curious about it and they want to play it, so I’m happy to say that Rayman Legends passes that “non-gamer friend” challenge. This is a game you can add to your collection to show off how great it is when friends point at your console under your TV and exclaim, “Hey isn’t that a Wii U?”

Rayman Legends is a must play title for any Wii U owner. From my understanding the experience is a great one on any console, but some of the more interactive sections have been replaced with button prompts on other consoles. I can’t imagine not being able to control the touch-screen portions with 1:1 movement and instead relying on button presses. The game may have been delayed for launch on other consoles, but at its core Rayman Legends was always a Wii U title and it shows in execution. This game deserves to be played by every Wii U owner, because it was crafted specifically with you in mind.

None, I can’t think of a single one. Go buy this game.