One of the most annoying things about the Nintendo Switch is the mediocre battery life that Nintendo went for on the device. You can get about three and a half hours of Zelda: Breath of the Wild before you need to recharge, which isn’t too bad for a portable console-quality game. That’s not too bad, but it’s also not great if you have a job with a lot of downtime or a big commute.

We reached out to RAVPower to ask them if their 26,800mAh USB-C power bank would be able to charge the Nintendo Switch while it’s playing and they were gracious enough to send us a review unit to perform a bunch of tests with the Nintendo Switch. We’ve had the power bank for about two weeks now and we’ve performed various tests to determine how well it works with the Switch. 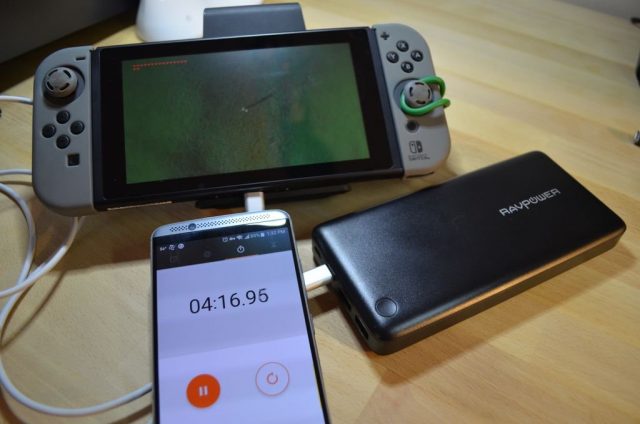 For this test, I wanted to see how long I could keep the Switch continuously running while it’s attached to a power bank. I used a small piece of flexible wire to hold the right analog joy-stick at a slight angle so the screen wouldn’t ever go off and set up my phone’s timer to see how well the Switch could last.

I recharged the power bank each night for five nights so I could have five samples of time to determine how well the power pack was able to keep the Nintendo Switch running. Here’s our times:

Overall, I was highly pleased with the performance of this power bank, especially because it has additional ports so you can charge controllers and other accessories with you. Tossing one of these in my bag while I’m on the go is the best way to assuage low power fears for smartphone users and thanks to the USB-C port on the Nintendo Switch, you can now charge and play at the same time!

Should I Get One?

Both of these discount codes will be available until April 14th, so you have a few days to decide if you want to take advantage of these deals.