Pikmin 3 is a strategy game for the Nintendo Wii U. Pikmin 3 is the third installment in the Pikmin series, which were previously released on the GameCube. The game will be released in Fall 2012, and will be a Wii U launch title. Pikmin 3 was originally intended as a Wii title, but Nintendo later decided to shift development to the new Wii U console. The new version of Pikmin 3 will feature HD graphics and will utilize the new Wii U controller in various ways. Online multiplayer and a co-op gameplay feature is rumored to be included via the new Nintendo Network online service. 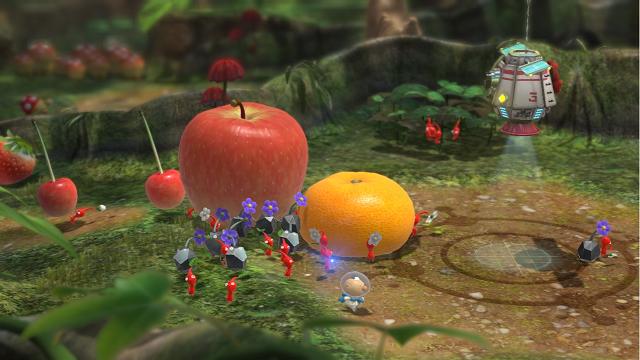 Pikmin 3’s story will be very similar to previous Pikmin games, according to creator Shigeru Miyamoto. Pikmin 3 will see the player control the character of Captain Olimar and or other characters. Via Olimar, the player controls small Pikmins, which they have to command and retrieve several pieces of their spaceship, in order for Captain Olimar to rebuild the ship and return home. The full details of the story are yet to be unveiled, but it’s expected that players will once again control Pikmins and have a limited time to complete objectives, as the player can’t stay on the Pikmin planet longer than 30 days due to lack of oxygen and life support.

Pikmin 3 gameplay is set in third person, top down view, much like other real time strategy games. The player can control up to 100 Pikmin creatures at the same time, organized in different groups or “mobs”. So far it’s uncertain how the Wii U controller will be utilized in Pikmin 3, but it will undoubtedly have a huge part to play when it comes to Pikmin 3 gameplay and controlling the Pikmins.

This is the first Pikmin 3 trailer, released during E3 2012. The game was also demoed at E3 by creator Shigeru Miyamoto.

We’ll be updating this page as more and more details are revealed about the Pikmin 3 game.