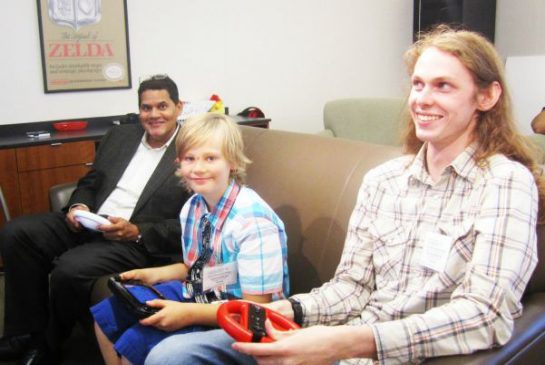 Shea Sparling, a 10-year old boy with a life-threatening disease called polyarteritis nodosa, had one big dream: to meet Nintendo of America’s Reggie Fils-Aime. And thanks to the Dream Factory, Shea’s dream came true.

He got to meet Reggie Fils-Aime at Nintendo’s headquarters in Redmond, Washington, where he got to play a round of Mario Kart 8 on the Wii U with Reggie.

Shea got to bring his mother and older brother along, and had a great time with Nintendo and Reggie. Here’s what Shea’s mother had to say:

“We had so much fun. They had signs welcoming us and we went on a tour of the building. We met with Reggie and the kids even played a game of Mario Kart with him. He was so gracious and relaxed and spent time chatting with Shea, answering his questions.”

The meeting was organized by Dream Factory, a charitable organization that fulfills dreams and wishes of kids with life-threatening diseases.