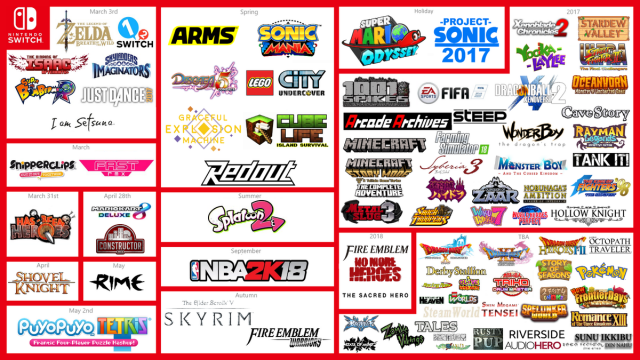 Now that the Nintendo Switch seems to be doing the job the Wii U was intended to do, we can start focusing on what we know is coming in the future. With the Switch likely serving as the future hybrid to replace both the Wii U and the 3DS, it’s not unlikely that we’ll see some former handheld-only titles making the jump.

None of these games have been announced just yet, but we think it’s only a matter of time before they are. We’re looking forward to them simply because we know they’ll probably be at their best on the Nintendo Switch. Follow along and see if you agree and let us know in the comments with your own suggestions if you don’t!

Rocket League is one of the best competitive multiplayer games available on console and PC and we think it would be right at home on the Nintendo Switch. Psyonix has discussed some interest in bringing the game to the Nintendo Switch, but so far nothing has been confirmed. It seems like the Switch would be the perfect place for this game since it appeals to such a wide variety of players and it’s one of the few non-violent multiplayer games that’s not Nintendo-sponsored.

Soonish? Maybe? Who knows. But if I had to bet money on it I’d say that the Switch will get it sooner rather than later.

Alright, so this is definitely wishful thinking on my part, but I also think it depends on how well the upcoming port of Skyrim does for Bethesda on the Nintendo Switch. If it sees a high adoption rate for the console and Bethesda feels like it’s worth it, I could see them porting Fallout 4 to the console as a sort of GOTY edition with all the DLC included.

I’d be really happy with this decision if it turns out to be true, but I wouldn’t bet money on it if asked. It all hinges on how well Skyrim does and we won’t know the answer to that question until later this year.

Since the release of Donkey Kong Country: Tropical Freeze, Retro Studios has been extremely quiet about what they’ve been working on. Could it be a new entry in the Metroid Prime series? A new Donkey Kong? Either way, we’re willing to bet we’ll see the big hairy ape and his little monkey companion on Switch soon.

With Nintendo’s penchant for re-releasing Wii U games, I wouldn’t be surprised if Donkey Kong Country 3D Returns and Donkey Kong Country: Tropical Freeze themselves both make their way to the Switch as ports. After all, the Wii U only sold less than 15 million consoles and the Switch is looking like it could eclipse that within its first year if sales keep up. It makes a lot of business sense to re-release games not everyone got to play.

Once again, the Kirby franchise is ripe for the picking when it comes to bringing Wii U games to new Switch owners. Kirby and the Rainbow Curse and Kirby’s Return to Dreamland both could be brought to Nintendo Switch owners with relatively little fuss. Sure, those of us who have already played these games on Wii U will be disappointed if this happens, but remember that Nintendo is trying to broaden the reach of games that had a painfully small reach with the Wii U.

Luigi’s Mansion: Dark Moon for Nintendo 3DS was a pretty interesting sequel to the GameCube game and I could see Nintendo reviving this series for the Switch, thanks to the ability to play multiplayer with just one console. The multiplayer aspect on the Nintendo 3DS was one of the most unique and fun experiences on that console, so it would definitely serve the Nintendo Switch well.

WarioWare was the original crazy zany mini-game, so I can see Nintendo reviving it for the Switch. Perhaps they’ll want to port Game & Wario over from the Wii U, or perhaps we’ll get an all new experience tailored for the Nintendo Switch. Either way, we bet this is probably on the docket for Nintendo.

We’re willing to bet that the reason the Wii U didn’t see a main entry in the series is because Nintendo plans on having that entry on the Switch. With the success of the “open air” Zelda: Breath of the Wild, perhaps we’ll see an open world Animal Crossing where you can travel between towns of various animals? That would be pretty interesting.

It’s safe to say that Super Smash Bros. on Wii U was a hit and we’re willing to bet that Nintendo will do the same thing it did with Mario Kart 8. They’ll package all the DLC that was released for the game over the life of the Wii U into the base game and call it Super Smash Bros. Deluxe.

There were rumors a few months back that The Pokemon Company is hiring artists to help create a 3D Pokemon Game. For a while now, Game Freak has abandoned the traditional pixellated sprites that made Pokemon so popular and instead went for a more traditional look that mimics the look of the Pokemon anime.

It’s a good move for the series, especially when you consider the next Pokemon Game could feature more “open air” elements thanks to the power of the Nintendo Switch.

One of the most disappointing things about the Monster Hunter franchise abandoning Sony’s portable for the Nintendo 3DS was the drop in resolution and the way the game played before the New Nintendo 3DS came about. It was awkward to say the least, but that hasn’t stopped the game’s popularity in Japan.

The Wii U had a main entry in the Monster Hunter series and the series continues to do well in Japan with Monster Hunter XX claiming the top spot on charts. There’s no doubt in my mind that when Capcom finally gets around to announcing a new Monster Hunter game for Nintendo Switch, it’ll be mindblowing. They’ve finally got the proper hardware to make a portable HD Monster Hunter that’s a blast to play.

So that’s our list of game series’ that we’re most looking forward to playing on the Nintendo Switch in the future. I left out titles that have already been announced or that we know are coming because there’s no fun in speculating there! Do you have a game that you’re eager to see on Nintendo Switch that I left off this list? Let us know in the comments!