In the early life of the Nintendo Switch, when it was still codenamed Nintendo NX, there were a lot of rumors floating around about the device. We saw a console with an oval shape and a screen that seemed built into the buttons and rumors that the new device would run Android as its operating system.

While the product we have today resembles nothing of those early prototypes, it looks like the Android rumor may not have been far off. Cyanogen’s Kirt McMaster tweeted early this morning to say that Nintendo had approached him about designing a custom Android-based operating system for their new console, but he had some choice words for the company. 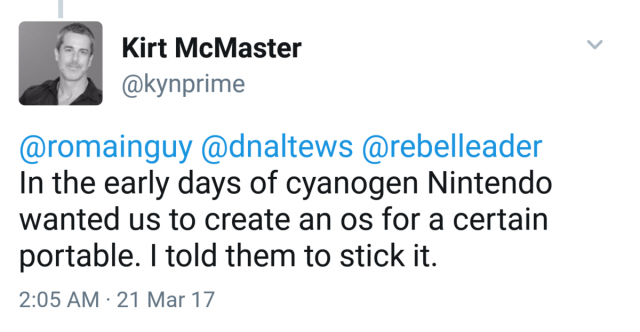 It seems Nintendo decided to scrap the Android angle all together, as the current Nintendo Switch operating system is powered by a custom FreeBSD fork. It’s speedy and responsive, which were the things I wanted out of the console, so it looks like the real loser here was Cyanogen, rather than Nintendo.