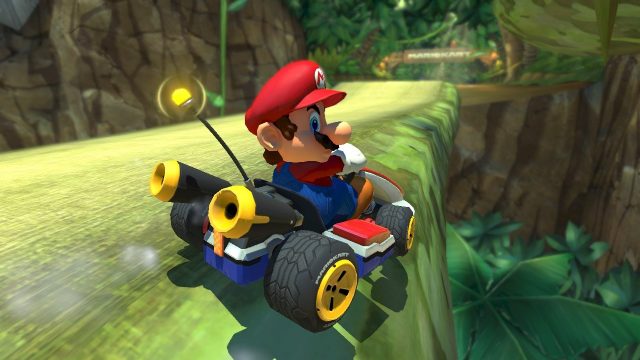 One of the most iconic and frustrating aspects of the Mario Kart series is the Blue Shell. Some see it as the great equalizer, giving people at the back of the pack a change to catch up by introducing some unknown chaos to those at the front. Eurogamer recently sat down with Kosuke Yabuki, who worked on both Mario Kart 8 Deluxe and ARMS, to ask some pointed questions about the Blue Shell.

The appearance conditions for the Blue Shell are somewhat worked out but still a mystery. We know they go to the people who are in the lower spots of the race more often than those who are in the top three spots, but is there a magical formula to the way the Blue Shell appears? Apparently not, according to Yabuki. It’s all about making players feel their emotions. The Blue Shell accomplishes that quite handily.

Something I personally really consider is the human emotion element of the play experience. So for example playing Mario Kart – if you have something that feels unfair or makes you feel frustrated or makes you angry… Everyone is different in that respect. What you will feel is unfair might be different to someone else. As far as possible we want to avoid those feelings of frustration.

But because everyone is different, and it’s an emotive thing, you can’t pin it down with a set formula. Ultimately, in the longer term, although everyone might feel on one particular day that they’re so frustrated that they’re not going to play any more Mario Kart today – keeping the experience enjoyable enough so that you might feel like that today, but the next day, the next week, you’ll still go back to Mario Kart and still enjoy it.

Second, Yabuki was asked if Nintendo has ever considered getting rid of the item that causes the most fights in their “family-friendly” game?

We’re always experimenting with what new elements to introduce or what elements can be removed. We have tried – or we are trying – to see what the game’s like without the blue shell. When we’ve experimented without the blue shell, actually it feels like something’s missing. Like there’s something not quite enough in the game. So for now we’ve kept it in. You know, sometimes life isn’t fair. Sometimes in life you have something where you feel that’s not right, and that’s frustrating. I think things are more interesting like that, with the blue shells of life.

So there you have it, folks. The blue shell isn’t going anywhere because it adds in those moments where you feel as though you’ve done everything right but you still lose. It’s the unpredictable nature of the Blue Shell’s ability to even the odds for those in the back of the pack that make it a necessary part of the game, even if it feels cheap.