Have you ever played a game on one platform, found out you didn’t like it, and then realized it’s far better on a different platform? Well, that’s where I’m at with Ironcast on the Nintendo Switch.

I originally played this title last year when it launched on the PS4. My initial impressions were mostly negative: I didn’t like how random certain elements felt, and I absolutely loathed the roguelike permadeath system. There’s a pretty high chance that if your game has permadeath, I’m not going to have much fun. Yet, here I am, playing Ironcast yet again, this time on the Nintendo Switch. Why am I playing it again? I wanted to see if things would click this time, and guess what? They did.

Ironcast is a turn-based, roguelike, strategy steampunk game. Yeah, that’s a complex description, but this is a complex game. Piloting your mech suit, you’ll go from mission to mission in an alternative version of Victorian-era Europe, where steampunk mechs are totally normal. The one thing that hasn’t changed since I last played Ironcast is the story; it just doesn’t seem important. The overall concept is interesting, but without a straightforward level structure to properly advance the narrative, it gets lost in the rest of the complicated mechanics of Ironcast.

Speaking of complicated, Ironcast is just that. There’s a lot to swallow with this game. By the end of the tutorial, I was groaning as all the systems started to come into play. The overall goal of most battles is to destroy the enemy mech. To do this, you’ll need to fill various gauges (and monitor more gauges) by matching shapes on a board in the middle of the screen. The tutorial throws everything and the kitchen sink at you, without much time to digest what’s going on. As soon as one mechanic comes into play, you’re being ushered off to learn about something else. The different systems should have been introduced gradually, but again, that would probably require removing the roguelike elements.

Once you get the hang of things, battles become more about a combination of luck and managing the various systems. You never want to have too low of coolant or you can’t fire your weapons. Similarly, you’ll want to pay attention to your enemies’ systems so you can take them out in a more efficient manner. There’s a lot of strategy involved, I just wish it was less luck-involved.

Though I managed to get a hang of things after a half-hour of playing, I never felt like I was truly in control. I always felt like I wasn’t playing efficiently enough. I went from trying to micro-manage the systems I had to paying more attention to getting ammo for all-out assaults, or energy to keep my shields up. Rarely did I ever feel compelled to repair my guns or shields, because I just couldn’t be bothered to remember everything. 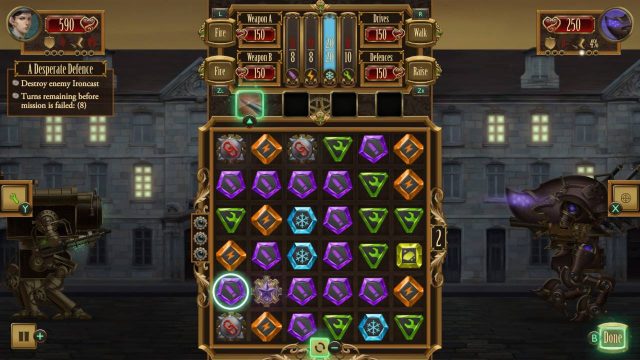 I was glad, though, when I started to understand what was going on. No longer was I fumbling around on the board, blindly matching shapes and shooting at the enemy in front of me. Now, I was effortlessly charging my ammo and shields, while firing energy cannons to deplete an enemy’s shields so I could go for a more direct attack. That’s one thing I really like about Ironcast: there’s a fair bit of strategy to everything.

Instead of shooting at nothing in particular, I was now focused on targeting an enemy’s energy cannon so they couldn’t do too much damage to my own shields. Sometimes, I even repaired my guns, though, that was a rarity.

Outside of battle, you’ll spend any money you’ve earned to repair your mech or purchase new equipment. Anything you purchase doesn’t stay with you after death though, so your items feel more like something you hope will let you survive the next fight, rather than something personal you’ve earned.

That said, there is a secondary currency you can use to purchase new pilots with different abilities, new special attacks, or even mechs that carry over from playthrough to playthrough. This currency is rare, so it’s important to get it whenever it pops up on the game board.

Play it your way 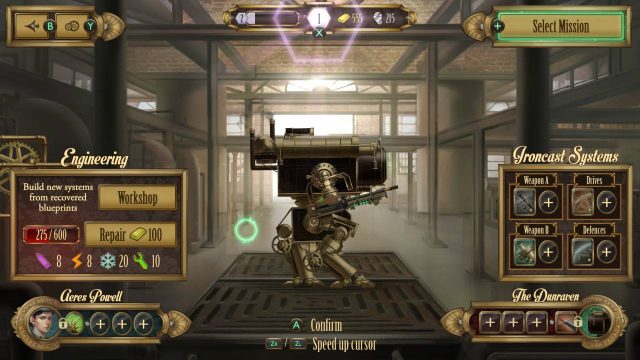 The best thing about Ironcast isn’t its punchy sounds or addicting gameplay. Nope, it’s the wealth of options you’re given.

Like most Switch games, you can play Ironcast while docked or undocked, yet this game takes it a step further. Because the majority of your time will be spent matching up shapes, Ironcast lets you control the entire game with just the touch screen. I tried this out during my two hours playing Ironcast, and I was pretty surprised by how well it works.

In touch screen mode, the UI doesn’t change. Icons don’t get bigger to accomodate for your finger size or anything like that. What you see in every other mode is exactly what you’ll get when you’re playing on the touch screen. This makes it easy to seamlessly go from playing with the Joy-Cons or Pro Controller to just the touch screen.

As easy as playing with this method was, I still prefer using actual controllers. My problem with this method is that I wasn’t as precise when matching shapes, because my finger would block the screen, so thinking on the fly was a tad bit difficult.

If you’ve been waiting to try out Ironcast, then there’s no better time than on the Nintendo Switch.