FIFA 13 for the Wii U is a football (soccer) game in the long running FIFA series. FIFA 13 brings with it a slew of improvements over the previous version, including better physics, commentary, new features, and more. The FIFA 13 Wii U version will utilize the Wii U GamePad controller in various ways, including subbing players, calling out plays, and even as a secondary camera to see the field from another angle. FIFA 13 will feature dozens of leagues from all over the world, hundreds of players, national teams, and more. The game is expected to be a Wii U launch title. 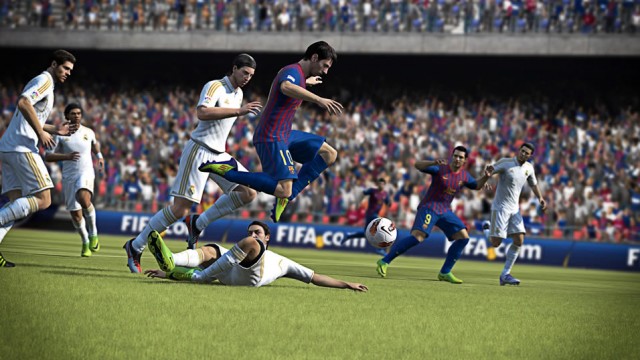 FIFA 13 Wii U edition will include full support for the Wii U GamePad controller. The secondary tablet screen has been rumored to include such features as player substitutions, real-time play and tactical managing, and more. The screen was also said to offer a secondary view of the field, from another or closer angle, giving more detail of the action. This feature is unconfirmed, though. Developers at EA Canada have reportedly already figured out cool ways of integrating the new secondary screen, according to producer David Rutter. Some of the new gameplay features include “Tactical Free Kicks”, which give players more freedom when it comes to creating great free kicks, and Attacking Intelligence, which allows the player to break down the opponents defense to find ways of penetrating and scoring goals.