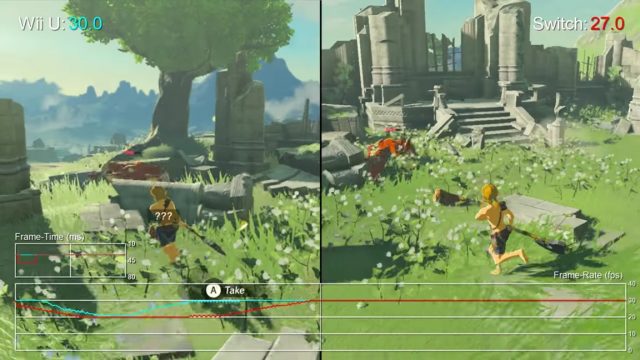 One of the interesting reveals of Breath of the Wild was that the Wii U framerate appears to be more stable than the Nintendo Switch framerate. This led some people to wonder if Nintendo’s newest console was yet again underpowered for the games it’s attempting to run, but an unaffiliated developer from Bplus Games believes he knows why the game has issues.

Most of the frame-rate issues in Zelda are just programming failures. If Nintendo sets the right people to it they can totally fix them.

Some dev friends and I have the same feeling about that. Because sometimes it is just a specific zoom ratio that makes the frame-rate drop. Just zoom in a bit closer or further away and it runs super smooth.

The problem is that the game wants to show both near and far LOD (Level of Detail) objects. This is a frame-rate killer if two objects are in each other. To show that, it would need around 10 times the power.

And if you see Kakariko Village, the framerate hell there, and then the more beautiful Hateno Village, which runs super smoothly, you see that doesnâ€™t make sense. So something else is going wrong there.

This is an interesting perspective on the game and there’s plenty more information like that here. I have noticed some of what this developer talks about when the camera changes angles really quickly, such as when you’re fighting a Lynel and he charges, bringing the camera from an up close view point to very far away.

Still, these small frame rate hitches have had absolutely zero impact on how well I’ve experienced the game. It’s certainly no where near as bad as some games I’ve played on Xbox 360 and PS3 and it’s interesting to hear another developer chime in on the issue just from seeing it play out rather than having any peek at the actual code.