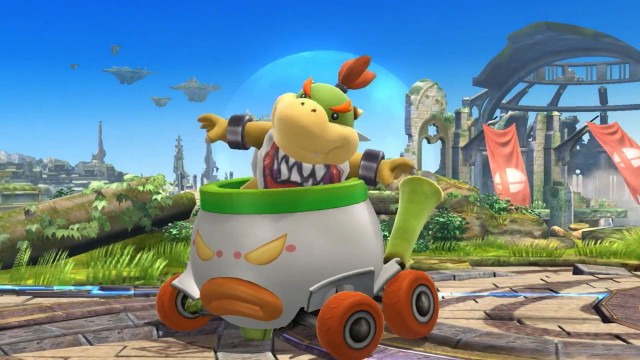 Now that Super Smash Bros. for both 3DS and Wii U are available across the globe, Masahiro Sakurai has been discussing internal development of the game with several outlets. In an interview with Japanese magazine Nintendo Dream, several new details have been revealed, including the fact that Bowser Jr. almost found himself on the cutting floor but was saved because Sakurai didn’t want to disappoint fans who loved the character. (Sorry, Ice Climbers fans.)

Sakurai said cutting a character from a game in which they’re previously available is always a hard decision and one the team doesn’t want to make frequently, thanks to the loyalty to certain characters fans feel.

After all we were planning on including so many characters, in the end this pace of announcing them was enough. Each and every character has fans, we wanted to drop as few as possible. About the order of which character has priority, the characters that donâ€™t have a new title coming up have an overwhelming disadvantageâ€¦even characters that we ended up including could have been left out if development had progressed differently. But even if 1 former character is left out, for the fans this is a huge thing.

He further elaborates on this by stating that re-creating some of the characters from previous titles was a garantuan task and despite not mentioning Ice Climbers specifically, we know they were cut because the data the team had to work with on the duo was very old and nearly impossible to work with in a timely fashion.

On our side, we are re-creating characters from the previous title, and keep on adding more, so the word â€œreduceâ€ is not appropriate. There are cases where we simply couldnâ€™t make it in the end, but on the whole we did a good job I think and the people at Bandai Namco Games did a great job. We had discussions on giving up on something many many times, Bowser Jr. was on the brink of being cut but the staff said â€œWeâ€™ll do our best!â€ and we made it.

Any Bowser Jr. players happy to see that their favorite character wasn’t left on the chopping block?