Yesterday, the ARMS community was thrown for a loop when they started the final weekend of Nintendo’s beta test for the upcoming Nintendo Switch exclusive. In addition to new modes Skillshot and Hoops, there was a mysterious new ARMS fighter who wasn’t previously on the roster. Turns out, he’s a boss, and a freaky one at that.

When playing the ARMS Testpunch, you and two other fighters might be matched together to go up against Hedlok, the first co-op fight in ARMS, outside of the 2v2 and Skillshot modes. Hedlok, in short, is a parasiteÂ type ARMS fighter, who latches onto the head of any ARMS fighter from the game’s 10-man roster and adds his own four arms for a total of six.

So far, I’ve seen Hedlok take the body of Mechanica, Ninjara, Ribbon Girl, and Spring Man. In addition to taking their bodies, he steals their special moves, so he’s able to teleport in a puff of smoke when he dodges like Ninjara. It might just be a visual effect, but it’s still annoying.

Hedlok also has, as far as I’ve seen, three levels. This comes as a surprise because we didn’t know about ARMS characters having levels beforehand. This might just be a Hedlok thing though. At his weakest, Hedlok is a level 3 fighter who offers a small challenge and a great introduction to some of the more advanced mechanics in ARMS.

However, at his strongest, Hedlok is a relentless, level 5 god who’ll throw punches that feel like bricks, and get all up in your face for a brutal volley of attacks. This guy willÂ absolutely require every trick under your sleeve and rock-solid teamwork if you want to take him down before time runs out.

Oh, and even if he has a sliver of health before the clock strikes zero, he still wins.

In case you want to join in on the fun, here are the times for the rest of this weekend’s Testpunch rounds: 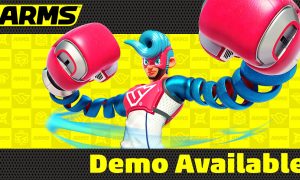 ARMS now has a free demo on the Switch eShop