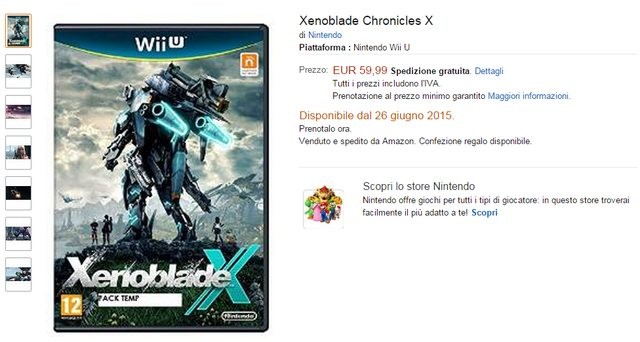 While online stores listing release dates are often times more wrong than they are right, occasionally we see a release date slip. Amazon Italy has listed Xenoblade Chronicles X with a June 26th release date which is odd, as Amazon typically uses the end of the month as a placeholder date until we have more confirmation. Given how much information we’ve seen about the game from the Japanese presentations, we wouldn’t be surprised to see the game dropping that early, however.

Take this with a grain of salt until Nintendo announces an official release date, but if this turns out to be true it looks like Xenoblade Chronicles X could be Nintendo’s hot summer title, instead of making the West wait until this fall to get their hands on the game. Japan is getting the game on April 29th, which means if this rumor is true the West will be getting the game only a short two months after its Japanese release.